With Christmas this weekend and Santa being tracked around the world, but the exact location of his base near the North Pole remaining secret, it is a good time to talk about why the poles are not very well mapped.

Some of the factors mentioned below actually apply to latitudes above about 50 degrees and help explain the poor imagery in northern Canada, Europe, and Russia.

Sun-synchronous orbits
Almost all imaging satellites follow what is known as a sun-synchronous orbit. Read more about why and what the orbit looks like here and here. A sun-synchronous orbit does not cover the poles. The exact limit varies slightly by satellite. The limit of Landsat imagery is 82.7 degrees. You can see where the imagery ends if you switch to historical imagery then look at the northern edge of Greenland. 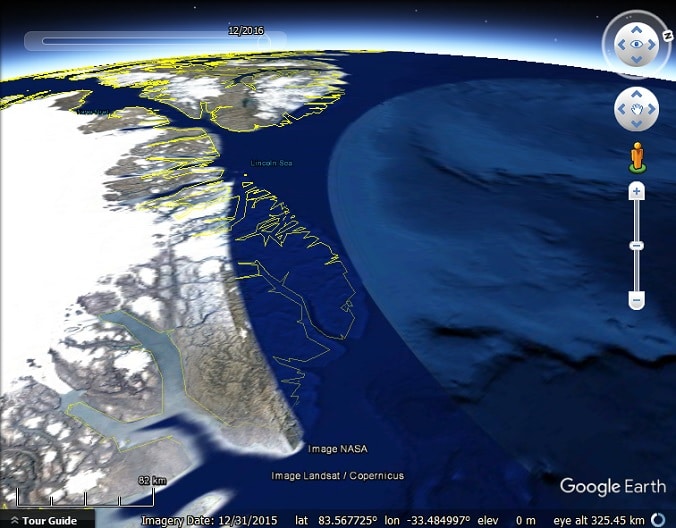 The northern limit of Landsat imagery is clearly visible in the global mosaics found in historical imagery. 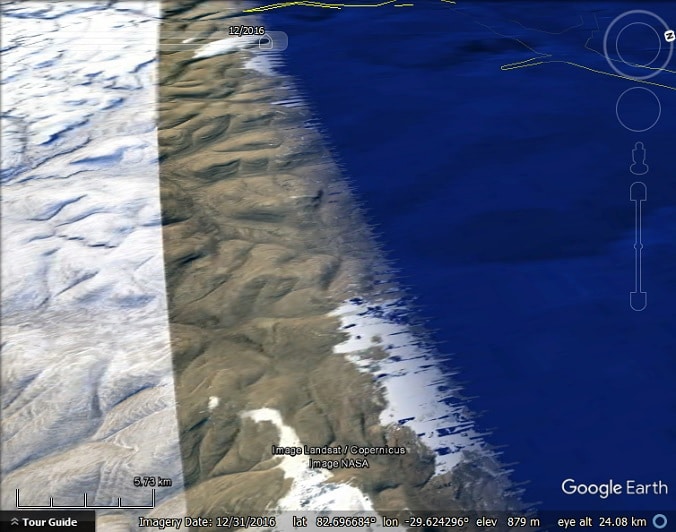 Zooming in closer, we see there is a strip of near snow-free imagery that is not part of the yearly mosaics, but is probably composed of Landsat imagery gathered across many years. 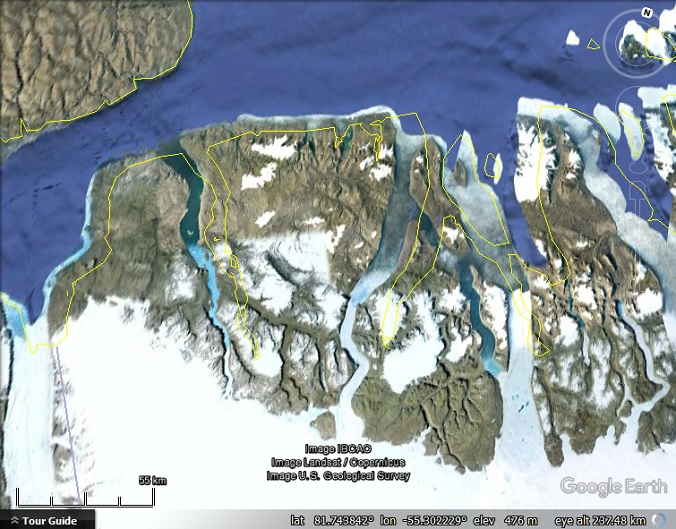 Also interesting is that Google Earth’s country border outlines are significantly out of alignment in parts of northern Greenland.

At the South Pole an obvious circle marks the southern extent of Landsat imagery. There is a smaller circle near the pole, but we don’t know its origin. Also visible is a ‘seam’ along the antimeridian where the edges of the mosaic don’t quite line up. 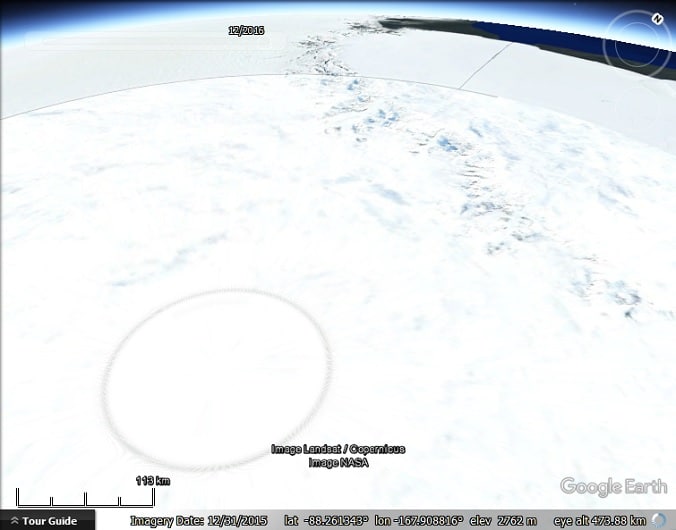 Web Mercator
Most web-based maps use the Web Mercator projection. This projection has a number of advantages for web-based maps, but one disadvantage is that it does not cover latitudes above 85.05 degrees. Google Maps doesn’t just have poor mapping around the poles, they are actually off the edge of the map.

We can see an obvious circle in the Arctic Ocean in the global mosaics in historical imagery. 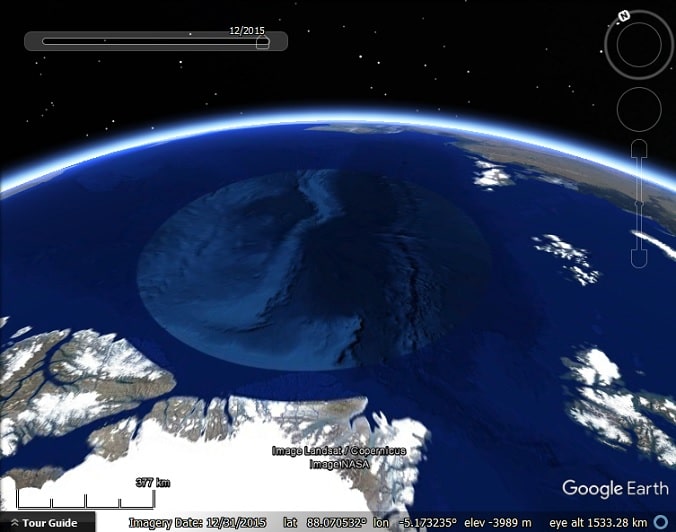 The northern circle is at about 83.6 degrees. This is the limit of the mosaics as created in Google Earth Engine, which is presumably based on the Web Mercator projection. We are not sure why it stops at 83.6 degrees rather than 85.05 or why the mosaics extend further north than the limit of Landsat imagery but don’t appear to in the southern hemisphere.

Light and snow
The poles are in darkness for half the year and even in mid summer, the sun is low on the horizon, which does not make for the best photographic conditions. If you look through Landsat imagery you will find that there is no imagery for the winter months at high latitudes. The Landsat satellites capture imagery even when there is snow cover, but most other satellites tend to avoid snow cover where possible. We had a look at the seasonality of satellite imagery in this post

Scientific and commercial interest
The main scientific and commercial interest near the poles tends to be along the coasts of Antarctica and around the edges of the Arctic ice sheet. Most wildlife is found near the edges of the ice. Scientists mapping ice flow are also mostly interested in the edges, in Antarctica they measure the speed of glaciers and the extent of ice shelves and in the Arctic the measure the yearly changes in the extent of the ice sheet. In the Arctic, commercial interests are in shipping routes and drilling for oil near the coastlines. Overall, there is not a lot of interest in the interior of Antarctica or the region around the North Pole.

Building a station at the North Pole would be difficult because the ice is constantly moving. At the South Pole is the Amundsen–Scott South Pole Station.

The Google Earth graphics engine
The way Google Earth displays imagery is not optimised for the poles, resulting in lines appearing to radiate from the poles. Even if Google were to obtain imagery of the Amundsen–Scott South Pole Station, it is likely it would not be very clear in Google Earth.