Last month we imported some placemarks from Wikipedia showing locations for all recorded tornadoes in the US for the last few years. We were hoping it would be useful for finding imagery of tornado tracks. However, it did not prove useful as the placemarks are based on reports of tornado sightings which are then later geocoded, probably based on the address provided by the person reporting it. This results in rather inaccurate locations overall.

So instead, we collected the locations of all the tornados we have covered in the past and also looked through the Google Earth historical imagery for more. 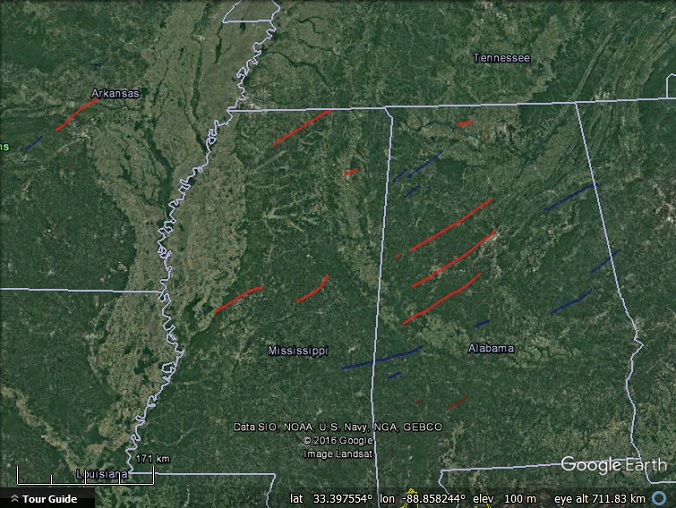 Tornado tracks. Red are tracks we have positively identified and blue are tracks we can see but have not yet matched to reported events.

We found the most tracks in Mississippi and Alabama. Although tornadoes are also common further north we believe that tornado tracks are much more visible in areas with forest than areas that are mostly open farmland. Damaged trees remain visible for a long time and are often cleared after the tornado, leaving visible strips of cleared land for years afterwards.

It is interesting that the majority of tracks follow approximately the same direction. Also interesting is just how long the tracks are. Many of them have clearly visible damage over 50 km and some more than 100 km.

To see the tracks in Google Earth, download this KML file

. We have implemented it as a network linked KML file as we plan to update it over time.

Be sure to switch to historical imagery and check the appropriate dates to see relevant imagery for each tornado.

If any of our readers knows of more tornado tracks that are visible in Google Earth imagery, please let us know in the comments. We would especially love to find tracks in other countries as almost all of the identified tracks are in the US.