Google has recently pushed out a number of new 3D areas. Of special note is Washington, D.C., the capital city of the United States of America. Google usually takes its time releasing capital cities as there are often a lot of landmark buildings and bridges in capital cites that Google pays special attention to. With Washington, D.C. we had assumed the delay was likely getting appropriate flying permission to fly over very security-sensitive areas. However, the imagery was captured sometime around October 2014. Not included in the 3D imagery are the most security-sensitive areas, the area known as the National Mall and surrounds, which includes the White House, the Washington Monument, U.S. Capitol Building and the Lincoln Memorial. We don’t know whether this means that it is still being worked on, or will never be added.

When looking around Washington, D.C. we felt that the trees seem to look more realistic than they used to in older 3D imagery. We believe this is because Google has got better at dealing with overhangs in the 3D imagery processing. It is difficult to do comparisons of Google’s progress on 3D imagery, as they don’t date the imagery and many areas have been reprocessed or updated over time. However, there was a water tower in Paris that we looked at a couple of years ago and the improvement is clear. At that time almost all objects with overhangs had vertical sides down to the ground, which caused trees to look like large bushes.

A water tower in Paris, France, as seen in Google Earth 3D. Left: September 2014, Right: as it looks now.

Now, trees and other objects seem to have quite significant overhangs, with the trunk of the tree either visible or non-existent, but still a much better effect than vertical sides. 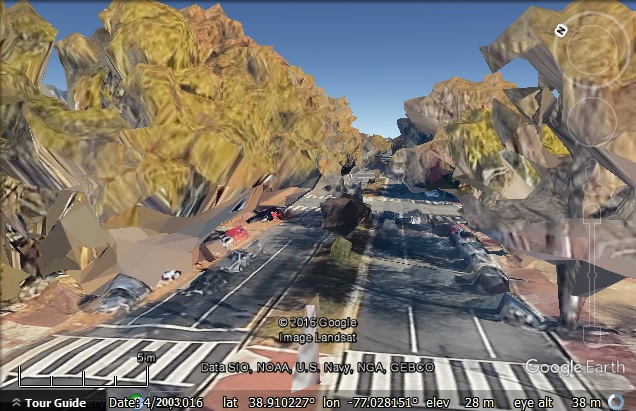 Although Google still can’t image the underside of trees, the overhang and level of detail of the road under the trees is impressive.

When Google adds 3D to an area they turn off the old type of 3D buildings, and often turn them off for a region around the new 3D area. This is also the case for Washington, D.C., but it seems to have been somewhat selective. The White House, for example, is missing but fountains on either side of it are still there. This is not censorship, as the old 3D models are still available if you switch to ‘historical imagery’.

Also of special interest, parts of Cape Town, South Africa are now in 3D. The Cape Town imagery was captured around January 2015.

or for the very latest finds see the comments at the end of this post. Once again, thank you to all those GEB readers who contribute to finding new areas and/or drawing the outlines.