[ Update: There were a few bugs in the first version of the KML most notably it reported no imagery for tiles starting with ‘0’. If you intend to use it, please re-download. We have also slightly improved the speed with which it checks for imagery as well as changing the sorting of the displayed images to most recent first. ]

When there are major events such as the ongoing flooding in Louisiana we often check whether the events are visible in Sentinel or Landsat imagery. Given that any given location is only covered about every 10 days by Sentinel and every 16 days by Landsat 8, the first thing we want to check is when the most recent images were taken and whether or not they are any good.

Note: Landsat 7 is offset from Landsat 8 by 8 days, so between them they cover the earth every 8 days, and the Copernicus mission plans to launch a second Sentinel-2 satellite this year, bringing down the revisit frequency to 5 days.

Checking the latest Sentinel imagery is only a few clicks away on Amazon Web Services (AWS), but we thought it would be worth making it even easier.

and when you click on a tile, it will check AWS for the latest imagery for that tile and show you previews of the most recent 6 images. If you are interested in one, simply click on the date below the image to go to the appropriate AWS download page. See this post for more on how to download it, process it and view it in Google Earth. 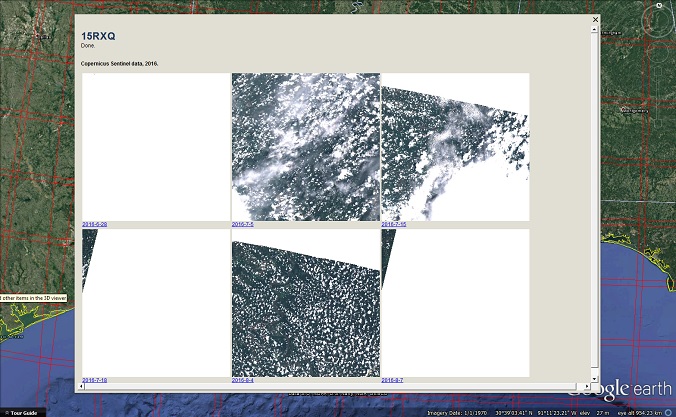 As you can see, quite often, most of the images are not usable as they don’t cover the part of the tile you may be interested in, or there is too much cloud cover.

The main difficulty we encountered while creating the KML was getting our modern JavaScript code to work in Google Earth’s slightly ageing internal browser. The problem is that Google Earth does not show JavaScript errors, so it is a matter of trial and error. Another difficulty was simply working with the KML, because it is so large. The original file was over 100 Mb and although we stripped it down to under 20 Mb by removing unnecessary information and reducing the precision of the coordinates, it still tended to be a bit too much for our text editors.