Last week we looked at Sentinel imagery coverage and today we are doing the same for Landsat imagery.

First, note that we are discussing Landsat 8 imagery only, as Landsat 7 imagery is not currently available on Amazon Web Services (AWS), which is the source of our information. In addition, we have excluded Landsat imagery captured at night as we do not have the appropriate Row/Path data for night time imagery – although the imagery itself is available on AWS. Also, this page says that although all scenes from 2015 onwards are available, only a selection of cloud-free scenes from 2013 and 2014 are included.

. Click on any square to see the date the last image was captured and how old that image is in days. Note that this KML is not dynamic and is based on the data as it was on AWS on August 20th, 2016. 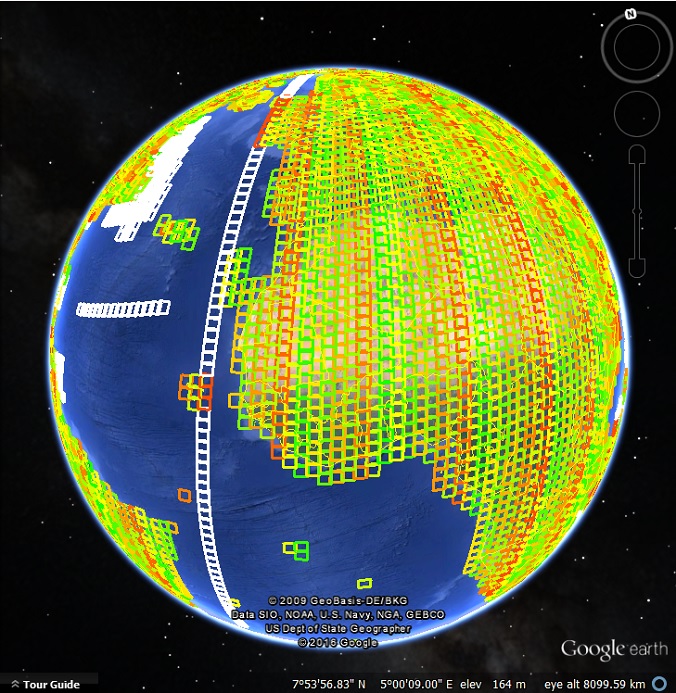 For imagery captured in the last 20 days, we have used this colour range:

with red for the most recent imagery and green as the oldest. Anything older than 20 days we have coloured white.

The imagery of Antarctica is mostly several months old, because it is too dark to capture good imagery over the winter months. There is also a horizontal stripe in the Atlantic and Pacific from February/March 2015 and a vertical stripe from May 2015. We do not know why they were captured, or why the oceans in general have never been captured.

Also of note is that some scenes are recorded with a slightly different scene identifier. Most of the scene identifiers start with the letters LC8, whereas these images start with either LO8 or LT8. There are only a few scenes with these different identifiers. According to this page this means that they include only data from the Operational Land Imager (OLI) or only from the Thermal Infrared Sensor (TIRS), whereas most Landsat imagery includes data from both sensors. We have included separate folders in the KML to show the coverage for the different cases. This page explains what each letter in a Landsat scene identifier means.

Our next project with this data is to create animations with the thumbnails.