To see the animations, simply download this KML file

, open it in Google Earth and click on any tile. 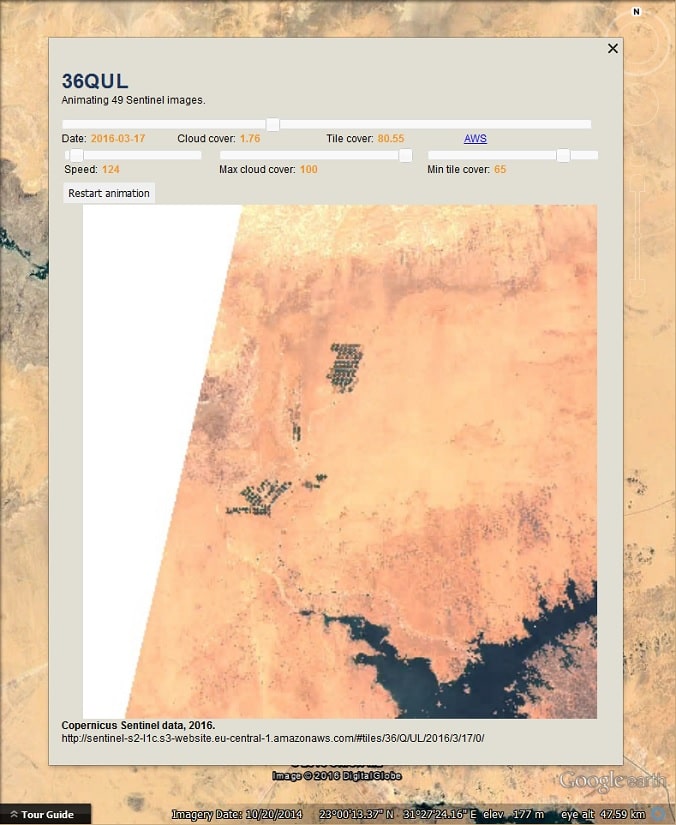 There are several differences between this one and the Landsat animations. The sentinel thumbnails are much lower resolution than the Landsat thumbnails, so we don’t provide a link to a larger version. Also, the sentinel images often do not cover the complete tile, so we have provided an extra slider to allow you to filter out tiles based on how much of the tile they cover.

The KML file also shows with colour coding how much sentinel imagery there is, with a range from green to red for 1 to 120 images per tile and white for tiles that have over 120 images. The highest numbers can be found over Europe, which is understandable given that it is a European satellite. The amount of imagery also increases towards the north of Europe, we believe this is because the paths the satellite takes overlap more near the poles, allowing more imagery to be captured. There are also hotspots over deserts suggesting that the images are selected for low cloud cover.

The Sentinel-2A satellite that is gathering the imagery was launched in June 2015. In comparison, Landsat 8 has been around since 2013. However, the Sentinel-2A satellite covers the globe roughly every 10 days, whereas Landsat 8 takes 16 days. In addition, the Landsat 8 archive on AWS only includes selected images from 2013 and 2014 (with significantly more of the US than other parts of the world) and only has the complete set of images from 2015 onwards. 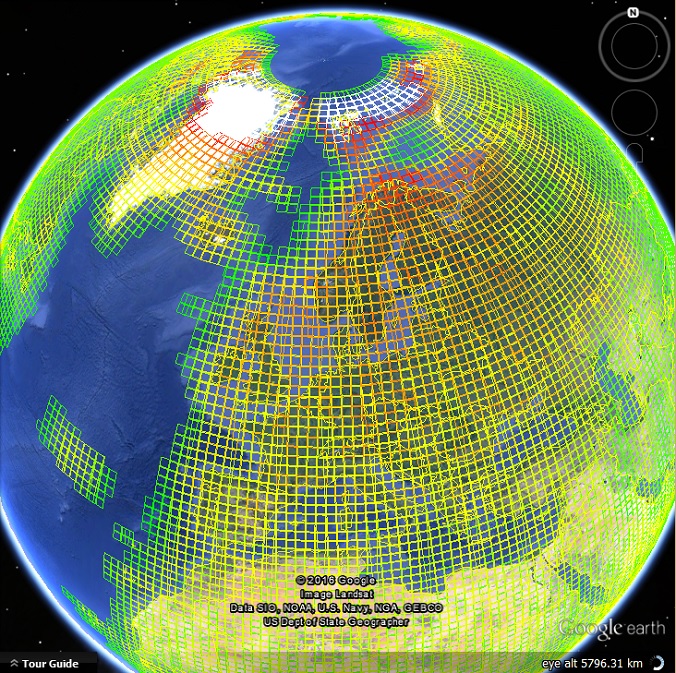 We also find the clouds look whiter and obstruct the picture more in the Sentinel imagery than they do in the Landsat imagery. This may relate to how the imagery was processed for the thumbnail or it could reflect differences in the exact wavelengths the respective satellites use to capture the colour bands.

We came across a few errors in the data, such as mislabelled tiles or missing thumbnails, but they were not significant enough to seriously affect the operation of the animations.

As with the Landsat imagery, it is important to note that this is very low resolution imagery, so expect to only see very large scale phenomena. Also, with only a year’s worth of data there is not a lot of change to see. However, it is a continuously updated service and with the expected launch of Sentinel-2B sometime next year doubling the frequency of imagery, we can expect some spectacular animations in years to come.