[ Update: We have updated the KML file with more stable animations and the ability to zoom in and out and pan. See this post for more details. ]

Yesterday we had a look at the coverage of Landsat 8 imagery, but we focused on how recent the imagery is. Today’s KML file instead colour codes tiles based on how many images are available. As we noted yesterday, the AWS archive is Landsat 8 imagery only and does not include all the imagery. It turns out that most of the world includes a fairly comprehensive set of imagery from 2015 onward, whereas the US (excluding Alaska) has imagery going back to 2013. The result is that most locations outside the US have about 44 scenes whereas the US typically has nearly twice as many, at about 77 scenes. Note that these figures increase with time as the data is live and a new scene is added to each tile approximately every 16 days. 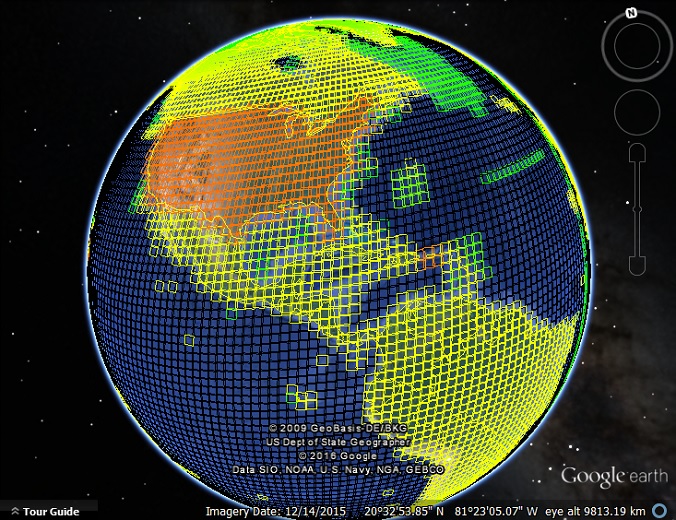 . Click on any coloured tile for an animation of that location. Depending on your internet speed, it may take a short while to load all the images. If you have slow internet or just want to get a quick preview of the animation, then download this KML file 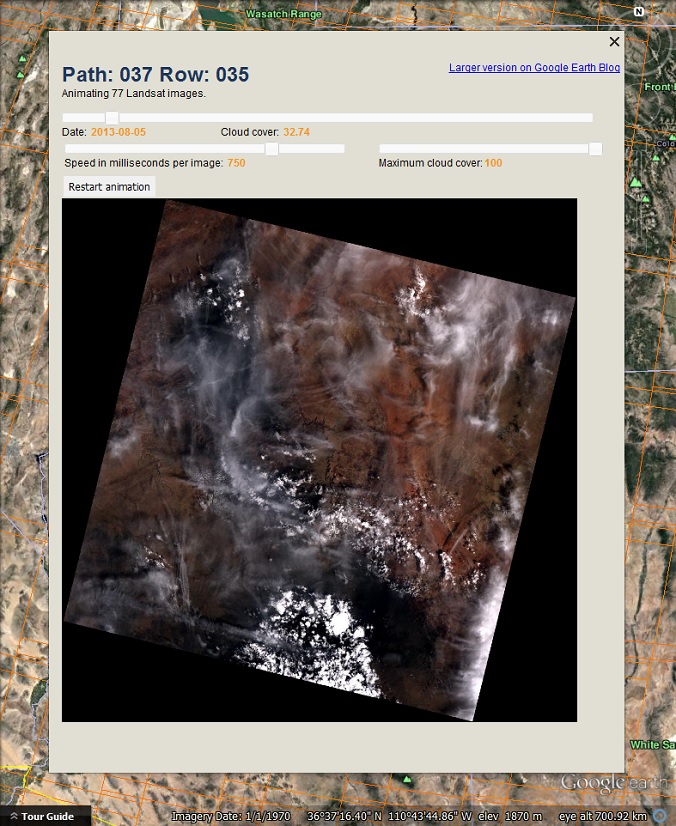 There are three sliders. The first slider shows the progress of the animation and allows you to manually switch between images. Doing so stops the animation, which you can restart with a button. The second slider lets you adjust the speed of the animation. The third slider allows you to filter the images by removing any with over a specified level of cloud cover.

AWS provides two thumbnails for each scene, one quite small one that we used for our ‘recent images’ KML and one much larger. We have used the larger one even though it is too large to comfortably show at full resolution in Google Earth. To see the animation running at full size, click the link at the top right of the animation window.

Remember that Landsat imagery is very low resolution (about 30m per pixel) and these are just thumbnails, which are even lower resolution than that. So expect to only see very large scale changes. Look for changes in seasons, ice cover changes near the poles, lakes shrinking or growing, and even sand dunes moving.

A major problem is the large amount of cloud cover in the images. If you select only scenes with minimal cloud cover you end up with only a few images to work with. This highlights just how difficult it is for commercial providers to get good imagery.

One problem we had was that the images are not captured from exactly the same angle, so there was a significant amount of shaking in the animations. We have tried to fix this by reading the latitude and longitude metadata included with the scenes and moving the individual images appropriately. It is still not perfect as a browser cannot position an image at sub-pixel resolution.

Let us know in the comments if you find anything particularly interesting. Ideally tell us the path and row.

Here is an interesting tile in Chad that shows some fire scars.