Thank you to GEB reader Jackson for letting us know that the Lexington Financial Center, a tall building in Lexington, Kentucky, is completely absent in the recently released 3D imagery for the area. 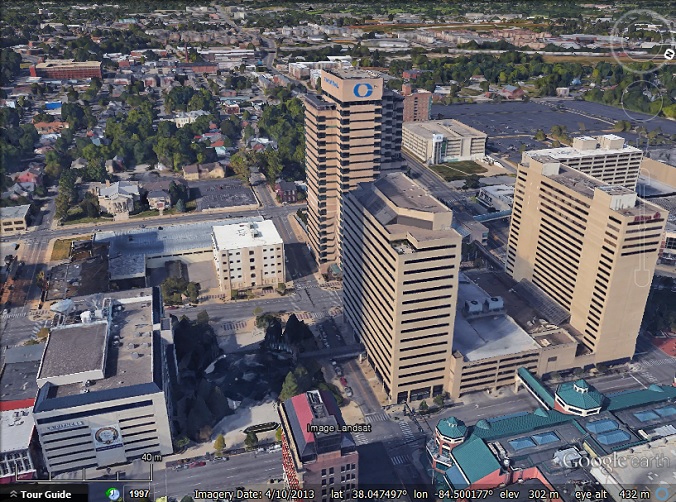 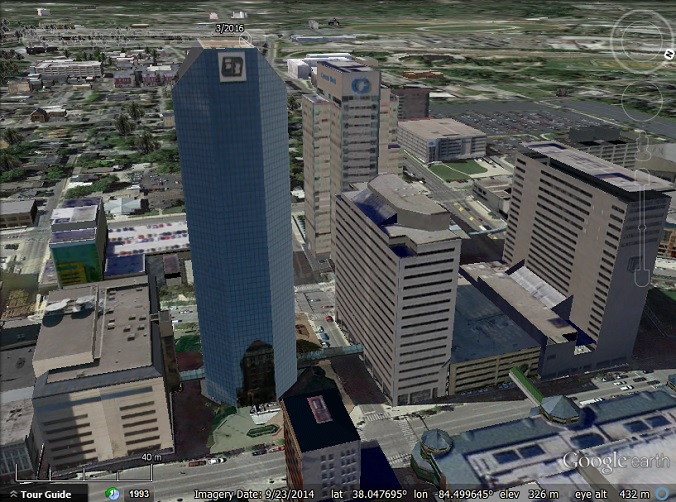 To see the old 3D user-created models simply switch to ‘historical imagery’ while keeping the 3D buildings layer turned on.

A couple of blocks away, just visible at the left hand side of the screen shot above and shown in close-up below, there are some smaller buildings that have been flattened. 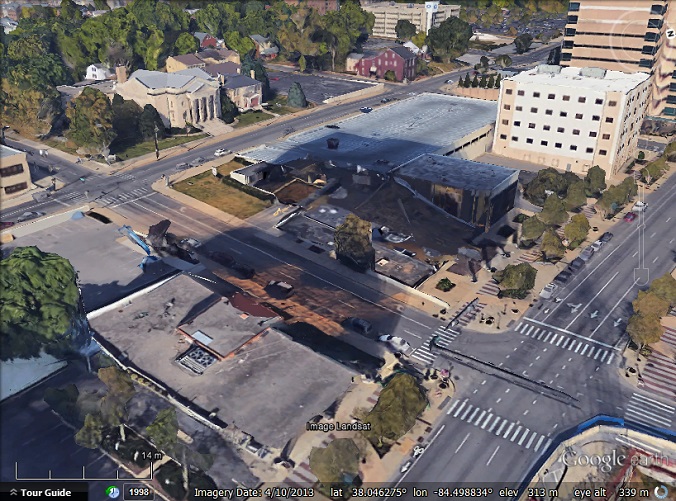 Roof top air-conditioning units appear to be at ground level. 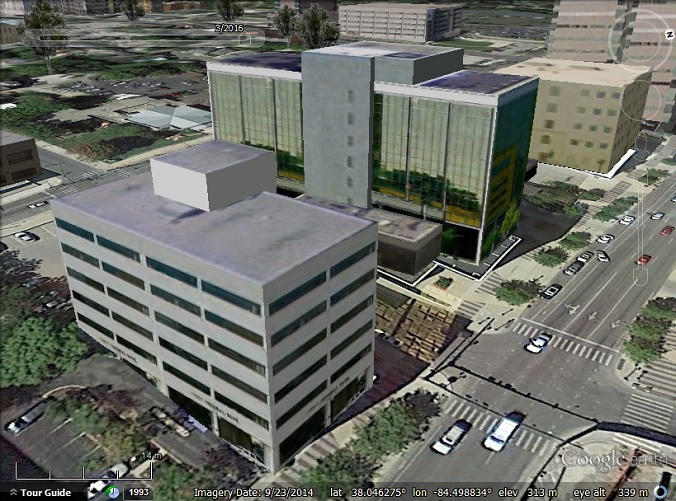 The missing buildings are smaller than the Lexington Financial Center, but not insignificant.

So what caused this? Without knowing Google’s exact process we can only guess. The Lexington Financial Center, as well and one of the smaller buildings, are covered in glass. We know Google Earth’s 3D imagery creating process has trouble with water and highly uniform areas. So it could be caused by something related to the very uniform surface of the Lexington Financial Center or something to do with reflections in the glass being different from different angles, which would throw off the stereoscopic algorithms. Notice in the older models above, there are strong reflections in both the Lexington Financial Center and one of the smaller buildings. Notice also strong shadows and light reflected from the windows between the two smaller buildings. If imagery was captured at different times of day then the patterns will have moved.

We do not know how common this is and suspect that Google manually guides the algorithm in many cases and that in this case their quality checkers missed these buildings. Google typically takes quite a long time between capturing and releasing 3D imagery, so there must be quite a lot of manual involvement in the process. There is not enough aerial imagery in this location to accurately date the 3D imagery. We are fairly sure it was captured after the most recent aerial image from September 2014. Our guess is somewhere in the first half of 2015.

When we had almost finished writing this post, we discovered a new clue. If you zoom out until the buildings are almost too small to see, the Lexington Financial Center appears, as does another nearby tall building that we hadn’t previously realized was missing. 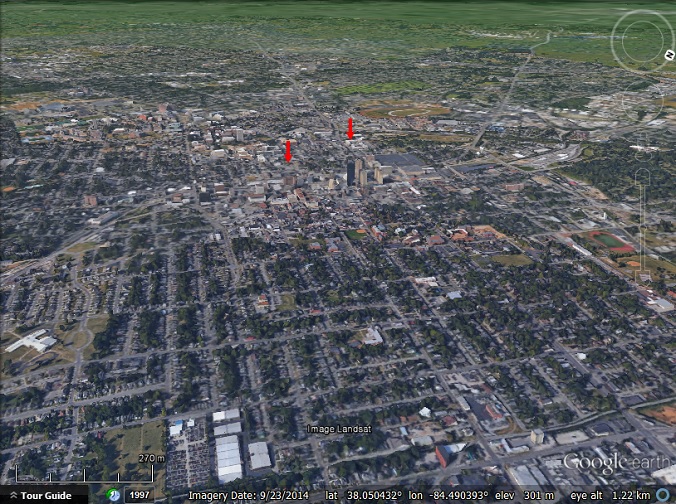 Additionally, you can get quite close and switch rapidly between ‘historical imagery’ and normal mode and you will see the various buildings mentioned appear for a moment and then rapidly vanish. We have noticed this effect previously with different imagery sets being visible at different zoom levels. We suspect that in this case Google does have a corrected 3D model but, by accident, uploaded the wrong model for the zoomed in version.

We considered grabbing the user created models and putting them into Google Earth alongside the new 3D imagery. However, the links in the Google Earth popups no-longer work, so we had to manually search the SketchUp 3D warehouse for the model of the Lexington Financial Center. We did find it here, but the export to KML does not work properly. It produces a badly formed KMZ file that does include the model but no associated KML file or textures. If you live in Lexington and do want to have the Lexington Financial Center back, you could download the Sketchup version of the model then use Sketchup to convert the model to KML format.

If any of our readers knows of any other large buildings that Google’s 3D failed to model, please let us know in the comments.

To find the locations of the missing buildings in Google Earth, download this KML file