I still remember the first time I used Google Earth and how my sense of wonder grew as I realized the amazing capabilities of the program to portray our planet Earth at new levels of detail with a huge source of data both in aerial imagery, but also in 3D. It has been a long time since I found a program which generated the same sense of wonder. Until now.

I recently ran across an application called Space Engine which was reported to produce amazing visualizations of space and let you tour not only our solar system and nearby stars, but also stars throughout the Milky Way. Even better, the developer uses an algorithm to create planets, moons, asteroids and comets for as many star systems as astronomers currently believe exist, throughout our galaxy. Beyond that, Space Engine generates them for galaxies throughout the universe as we know it. So, you can literally visit trillions upon trillions of stars and planets (if you had enough time!) for endless galaxies. When you visit a planet, moon or asteroid’s surface, the program procedurally creates 3D terrain and textures to make the surface appear more realistic. To put this in perspective, this program lets you have an entire Universe to explore inside your own computer. Wow! However, it does require a relatively powerful desktop computer (or gaming laptop) with a beefy video card to run well (see the minimum specs in the download link at his web site).

My feeling was just as enthusiastic viewing Space Engine as the first time I saw Google Earth. What really amazed me was seeing the beauty of our universe when portrayed using more current graphics technology, and the endless sense of exploration to discover new worlds. Space Engine allows you to experience the awe and wonder of the Universe and capture your memories to share with others. 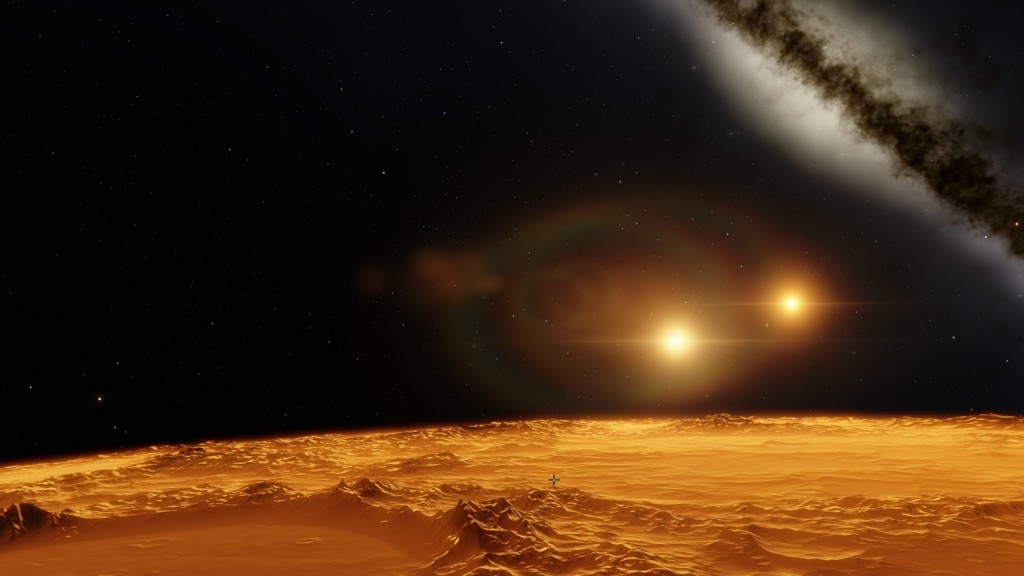 Space Engine uses data from dozens of astronomical databases to accurately portray the physical characteristics for all the known systems. It also extrapolates the characteristics for stars and planets beyond to fill our galaxy and other galaxies based on theoretical compositions. You can easily see the physical characteristics (size, mass, gravity, atmosphere, temperature extremes, and whether a planet could support life). In a sense it is more of a sandbox simulation, or a game, than a mirror of our universe.

It’s important to note that your movement in Space Engine isn’t limited by silly physical laws like the speed of light, so you are able to travel to other systems throughout the Universe in very reasonable amounts of time. If you were limited to our current technological and scientific abilities, and our understanding of physics (not being able to travel faster than the speed of light), it would take decades or centuries to even reach the nearest star systems to Earth.

I had plans for creating my own video demonstration of this application. But, I keep getting engrossed in the program. So, I’m sharing one of several YouTube videos about Space Engine to give you a taste of the experience. If you have dreamed of space flight, like I have, then you will most likely have the same reaction of awe and wonder that I do every time I use Space Engine. Watch this video demonstration by a gamer called Obsidian Ant who is just as amazed:

To make Space Engine more like a game, the developer has chosen to allow its users to add space ships and controls so you can fly through space as if you were an explorer and visit places. You can really get a sense of dimension when you compare objects next to a spaceship. The developer has even added support for virtual reality by supporting the Oculus Rift – so you can really immerse yourself in this universe.

Like with Google Earth, Space Engine lets you click at a place (a star or other object you see in the background) and see information about it. Then, you can click a button and choose to simply fly to that location and get a closer view. Using various controls (including that Space Navigator, mouse, keyboard, joystick or even flight sim controls) you can easily move around the various astronomical objects and get better views. You can even land on them. I find myself regularly taking screenshots (like photographs) of the amazing views I see in this program! I have long used space art as a desktop background on my computers, and now I have an endless supply of views that are as good or better than those I’ve used before. If you search Google Images, you can find many thousands of screenshots from this program on the Internet.

What’s really amazing about Space Engine, is that it was created, and continues to be developed, by a single person. Vladimir Romanyuk is a software engineer who lives in Russia. He has not only developed this application, but also architected his own universe using his knowledge of software and astrophysics. He does get help from an active community for space ship models, feedback, and contributions towards planetary models and textures. His software is not officially released yet – latest beta version is 0.9.7.4. But, judging by his fans, and my experiences, this freely available program is getting close to ready for broader use. According to his community forums he is planning to release a version of Space Engine for the Steam game platform soon which will greatly increase its exposure.

I should mention that there are some comparable commercial space games out there which already have a more robust gaming architecture for space travel with thousands of active users. The most popular and comparable one I’ve seen is Elite: Dangerous. Space Engine exists, in part, because of the much older pioneer in this genre of a free program called Celestia which also let you explore space and even allows people to create educational tours. I used Celestia many years ago as well and mentioned it in early days of Google Earth Blog posts, but the application has not been worked on for a long time. If you don’t have a fast enough computer for Space Engine, you can probably download and run Celestia (Windows, Mac, and Linux) and enjoy its more limited capabilities.

Many thanks to Vladimir for his fantastic work with Space Engine. He has done something I always thought would be the next step after Google Earth and even discussed with Google. I wish Vladimir the best success as he introduces his universe to a wider audience and continues to astound us with future features and data. His application right now is a real joy to experience. It may be a little tricky to learn the more advanced features, but the Space Engine forums can help you figure things out. Space Engine only runs on Windows right now, but he’s asking for donations to help him add new features and versions for Mac and Linux. He has recently uploaded his latest version to 0.9.7.4 RC1 (release candidate 1). Download here (note the file size shown on the page).

All of the screenshots in this post came from Space Engine with permission from it’s developer.