We have looked at the paths of destruction caused by tornadoes in Google Earth imagery a number of times before. Nearly every one of the tornadoes we have looked at in the US occurred in the months of April or May, which appears to be peak tornado season in the US. Tornadoes can, however, occur at any time of year and due to the unseasonably warm weather the US has been having recently there were several tornadoes just before Christmas.

We came across this story, which says that one of the tornadoes had a record long track for the month of December. Google has not yet released any December imagery so we wondered if it would be visible in Landsat imagery. We used the technique described in this post to get a relatively low resolution Landsat image of the area captured on December 24th, the day after the tornado struck and found we were able to just make out the path of the tornado. We also downloaded the higher resolution version of the Landsat data and processed it with software from GeoSage as described in this post.

We were able to trace out the path of the tornado a distance of around 92 km (57 miles). News reports, however, mention damage to property quite some distance from both ends of the visible track (from Clarksdale, Mississippi to Lutts, Arkansas) reaching at least double that distance. 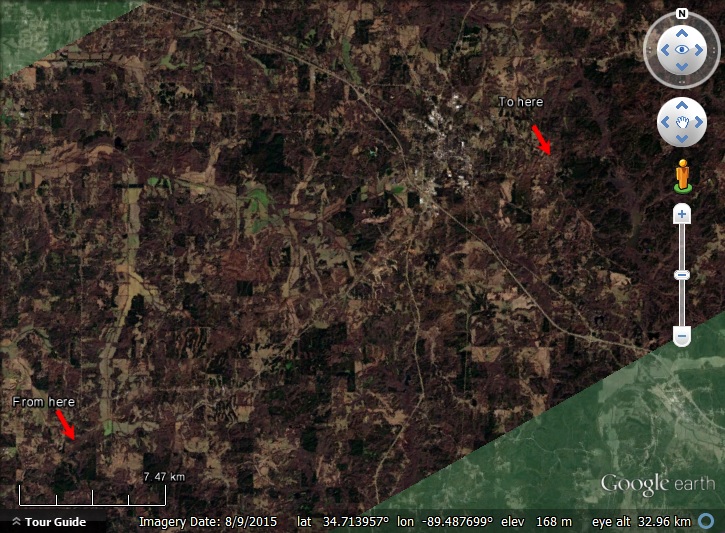 A section of the track as seen in Landsat 8 imagery. Can you see it?

Keep in mind that Landsat imagery has a resolution of about 30m per pixel. The visible track of the tornado is over a kilometre wide in places.

Shown above is only a part of the visible track. For the full track and two different versions of the Landsat imagery (cropped and compressed to keep the file sizes down) download this KML file. The KML also includes markers relating to some news stories and links to YouTube videos of the tornado or other tornadoes in the vicinity.