Did you know Google Earth has a free built in flight simulator and you can fly all over the world? It has been there since 2007, and in the meantime computers have gotten way faster and the data has gotten better. In some ways, its the best simulator you can fly!

Shortly after the flight simulator mode was first released as a surprise easter-egg by Google, I produced a video for this blog showing off the feature and how you could fly in Google Earth. But, it wasn’t possible to do an HD resolution video at that time and the content for the city I flew over was much lower resolution compared to today’s new Google Earth 3D imagery. I’ve been meaning to do an HD video for a long time. Check out this super HD video below – and make sure you view it FULL-SCREEN. You’ll be amazed Google Earth can do this! The video will give you all the basics on how to fly, but I’m sharing more details and tips below the video. This video was captured at 2560×1440 at 60FPS, so it really shows off the awesome 3D data Google has been putting in Google Earth the last few years.

Inside Google Earth, look for the menu choice under the Tools menu called Enter Flight Simulator…. A window will appear (see below) which lets you choose which plane you want to fly and where you want to start. To quit the simulator hit the Exit Flight Simuator button, or the ESC key on the keyboard. There’s also a keyboard shortcut “CTRL-ALT-a” that will start the mode immediately. 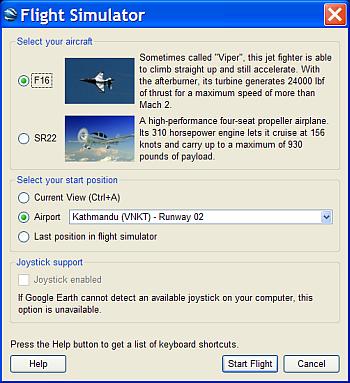 Get out there and try flying around! You’ll be amazed to find out how smooth Google Earth can be for exploring the world. I recommend you try areas like the Swiss Alps, the Rocky Mountains of the US, or the New Zealand mountains for some really nice terrain. All of these areas have high resolution terrain available in Google Earth. And Google Earth has added many cities with detailed 3D data, it’s definitely worth exploring to see your favorite cities.

The skies are always clear in Google Earth – so, have fun!

If you are a flying enthusiast, you might want to buy a real flight simulator. My current favorite is Microsoft Flight Simulator X (or FSX) only available now through Steam online. It works quite well on current desktops/laptops. You can find out more here (click on the image):