We were recently considering looking for imagery in Google Earth that shows Christmas trees or other Christmas related display. In order to do this we need to find imagery captured on, or around, Christmas. The best way to do this is with the Google Earth API. So we thought it would be a good opportunity to show off the usefulness of the Google Earth API before Google shuts it down (most likely sometime early next year).

So we created this Google Earth API based tool that helps find imagery captured on a specific day of the year or within a date range. 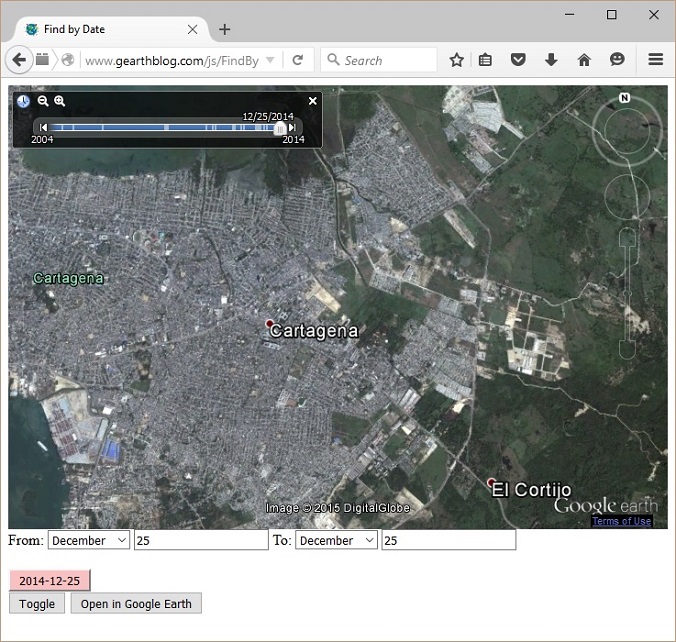 Next, select the date range you are interested in. Both dates are inclusive. Now zoom in to an area of interest. When you stop moving the view, the tool will look for imagery within the date range you selected and show the available dates. To actually find the imagery, select one of the available dates then click the ‘toggle’ button. The tool will switch between the selected date and the previous date, which should cause the image of interest to appear and disappear, making it easy to spot. Keep in mind that it may be near the edge of the view or even just off the edge. We also found that it can be very sluggish at times, especially over areas with a lot of imagery, or if you are zoomed out too far. Try zooming in a little bit if the toggle function has problems. Alternatively, or in combination with the above, you can move the viewport around and see when the date you are interested disappears or reappears.

Once you have identified an image you are interested in, you can click the “Open in Google Earth” button to download a KML file with the location you are currently looking at.

We have not done any thorough testing or added lots of features because the Google Earth API is coming to an end, so we do not expect this tool to see extensive use in the future. However, if you do find any bugs, let us know in the comments and we will try to fix them.

If you live in the northern hemisphere in a region that snows in the winter, you will probably not find any Christmas imagery for your area, as Google generally tries to avoid imagery with snow cover. Aerial imagery in particular is usually captured during summer. However, if there is a regular event that takes place in your area during the summer months, this tool may help you to find it in historical imagery.

Although the tool proved quite effective at finding imagery captured on Christmas day, we were unable to find anything relating to Christmas in the imagery, largely because the resolution of satellite imagery is a bit too low to make out enough detail. In addition, a lot of Christmas decorations are only highly visible at night. We found a number of images in Eastern Europe all captured on Christmas Day, 2013. For these and a few other locations we found download this KML file