Yesterday we had a look at the progress made by Google in releasing 3D imagery for Google Earth. For this we used this KML map

that we maintain that shows the areas covered by 3D imagery. This has been made possible with the assistance of a number of dedicated GEB readers who have contributed to our map. Until recently the outlines were being drawn by GEB reader Anton Rudolfsson, who also came up with the idea of the timeline section. He has had to stop drawing outlines due to other commitments. A big thank you to him for his contributions.

Since then a number of other readers have been sending in KML outlines which we incorporate into the master KML file. A big thank you to all these contributors. Also a big thank you to all the 3D hunters who find new 3D areas and let us know about them. Until now, they have been using the comments in this post to report the locations of new finds. However, there are now so many comments that it is becoming difficult to scroll to the end, so we would like to ask all contributors to start using the comments in this post from today onwards. In addition, please try and keep comments to a minimum just noting new areas covered with 3D or for messages to fellow 3D hunters. If you have any questions for us or notes about errors in the KML, please email us directly if possible, using either the Contact us page or my email address: timothy at gearthblog.com.

If you wish to submit outlines please first read through the instructions found here.

Combining the outlines we receive into the master KML file is largely a manual process. We have created scripts, such as this one, to make it easier to do this, but it is still laborious. However, given the positive feedback from GEB readers we believe it is worth the effort. 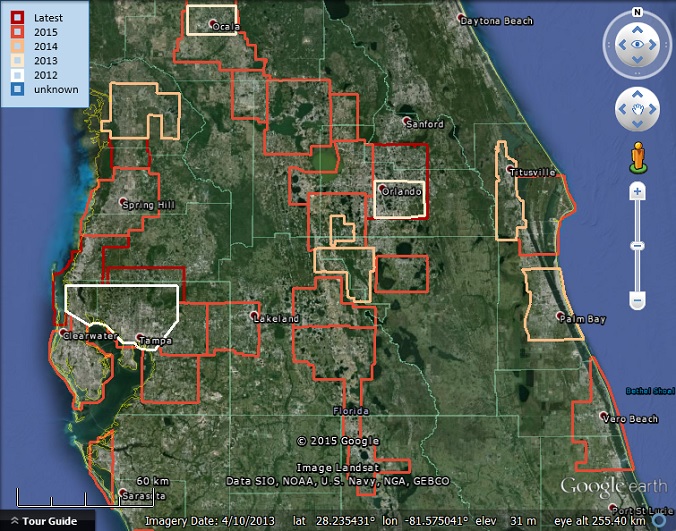 As various 3D areas are expanded and merged, getting the outlines correct can be quite complicated.