A GEB reader recently remarked that the Google Earth Clouds layer (a sub layer of the Weather layer) appears to have fewer clouds than it should when compared to the ‘Radar’ layer that often shows rain and storms in apparently cloud free areas.

The first thing to know about the Clouds layer is that it is not an optical photo of the clouds as they are seen from space. If we look at the images from a weather satellite such as Himawari 8, that we have looked at in the past, we can immediately see one of the problems that would arise from purely optical images. Approximately half the Earth is in darkness at any given time. 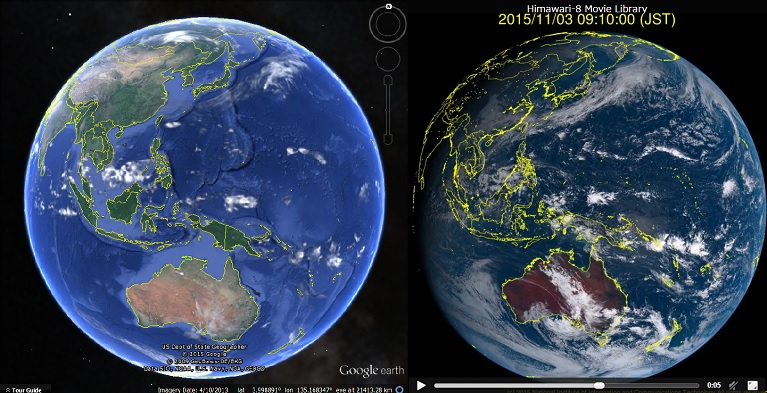 Weather satellites have a range of sensors that can detect clouds even in darkness. They make a map of the clouds that is then converted into an image with white where the clouds are that is then used in Google Earth. However, they appear to focus only on thick clouds, which results in an image showing a lot less clouds than can be seen in an typical photo from a weather satellite.

The Weather layer has an Information layer that includes the option to download animations of the Clouds and Radar layers. It also tells us that the data for the Clouds layer comes from the Naval Research Laboratory (NRL) Marine Meteorology Division. We had a look around their website but were unable to determine exactly which satellites are used for the Google Earth Cloud layer or anything about the process used. We think the data may come from MODIS (or Moderate Resolution Imaging Spectroradiometer) an instrument found on the Terra and Aqua NASA satellites. Learn more about them here. We also found this highly technical article about the algorithms used to collect cloud data and it is clearly a complicated process.

If any of our readers knows more about where the Google Earth Cloud layer comes from and how it is processed please let us know in the comments.