Open Location Codes also known as Plus Codes are an initiative by Google to provide addresses to parts of the world that do not have Street Names or other easily traceable or official addresses. Google has recently announced on the LatLong blog that Plus Codes are now searchable on Google and Google Maps. There is, however, no mention of Google Earth, and as of this writing, they do not work in Google Earth search.

Plus Codes come in several formats. To identify a specific location on the Earth (to an accuracy of a few metres) you typically need 10 or 11 characters looking something like this 8PVCQ9VH+4C. If the general location is already known then the code can be shortened. This also means that a code can be given as a combination of a locality in traditional format and a short code. However, we discovered that currently this mixed format doesn’t work correctly in either Google Search or Google Maps, but does on plus.codes that Google has made available to make it easier to look up the Plus Code for a given location.

To find a Plus Code in Google Earth the easiest way is to search for it in Google Maps, then copy the latitude and longitude that appear in the results into the Google Earth search box. However, we thought it would be fun to create a little converter from Plus Codes to KML. The conversion of Plus Codes to latitude and longitude is provided by Google on GitHub as open source libraries, including a JavaScript library that we have used. Then all we do is insert them into a KML with a little bit of JavaScript. Note that a proper Plus Code defines an area and not a single point, so the generated KML includes a rectangle as defined by the Plus Code as well as a marker for the centre of the rectangle.

Note that our converter only works on standard full length plus codes and cannot handle shortened or mixed versions. 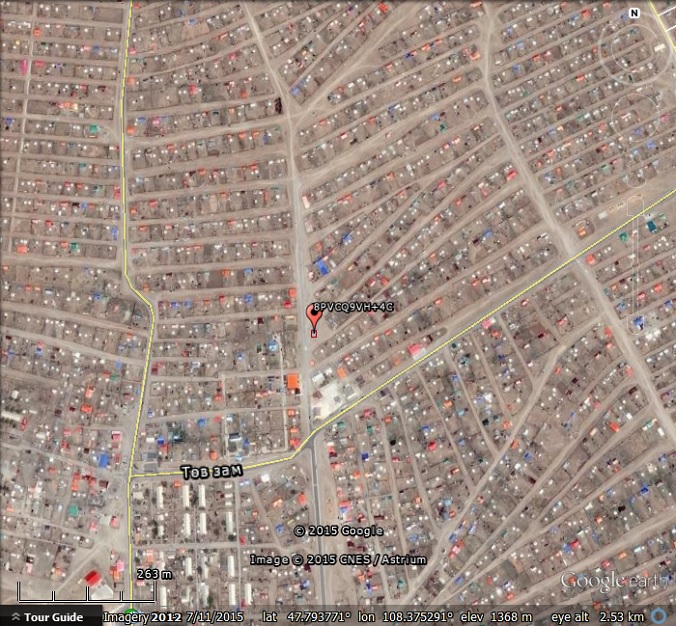 When roads are unnamed and not even marked on the map, you can still have an address. And in this remote part of Mongolia, you can even have Street View.