Google took an unusual two week break from releasing 3D imagery in the first half of August, but has been releasing more since then. We are a little behind on updating our KML, but we haven’t forgotten it, so bear with us. We have added quite a lot of areas today so be sure to refresh the network link if you are not seeing up to August 22nd. As always, a big thank you to GEB reader Anton Rudolfsson who draws the outlines. 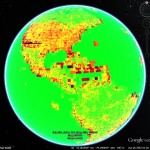 We have been using the Google Earth plugin to try and map out the density of historical imagery in Google Earth Part 1, part 2, part 3. In the process, we learned how Google Earth handles KML polygons that cross the antimeridian. 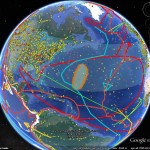 George of MyReadingMapped was kind enough to share his enormous collection of KMLs. If you haven’t seen them yet be sure to check them out. 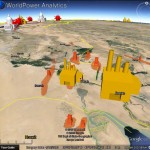 We looked at two power related maps, one dealing with world power and the other dealing with coal power. Both take advantage of 3D features in Google Earth to enhance the maps. 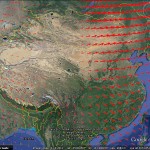 We discovered that Chinese maps have an offset relative to the rest of the world. We had a look at which direction they are offset and provided a basic JavaScript converter to convert KML from the WGS-84 datum (what most of the world uses) to the GCJ-02 datum (what China uses). 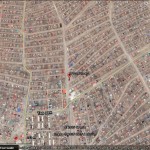 Google has made Open Location Codes, aka Plus Codes, searchable on the web and in Google Maps. However, they do not yet work in Google Earth search, so we created a small JavaScript converter to convert Plus Codes to KML. 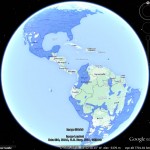 GEB reader Chris pointed us to an issue with the blue Street View layer, so we investigated further and found issues with it showing different areas at different zoom levels. For comparison, we also created an image overlay of the Google Maps version of the blue layer.