On April 18th, 2015 a boat carrying as many as 950 people capsized in the Mediterranean Sea. See the full story here. Soon after the disaster, DigitalGlobe captured satellite imagery of the location. We found out about this from DigitalGlobe’s First Look map. The imagery has now become available in Google Earth’s ‘historical imagery’. However, when you try to view it in Google Earth, the imagery only loads in low resolution.

We have noticed resolution problems in the past with imagery over the oceans but not given it much thought. For example, last month we looked at an oil slick captured in the aftermath of an explosion on an oil rig in the Gulf of Mexico. We noticed that the imagery was not particularly good but assumed it was unique to that imagery. Similarly, back in 2014 when Malaysian Airlines flight MH370 went missing and was believed to have gone down in the Indian Ocean off the coast of Australia, Google Earth got quite a lot of satellite imagery over the search area and we noticed at the time that much of that was of poor resolution but didn’t know why.

So what is going on? We have looked more carefully at satellite imagery over oceans around the globe and it seems that whenever it is away from land, the quality is reduced considerably. Google Earth must have a built in algorithm that stops it from loading high resolution imagery far from the land. We realise this is a good optimization to have most of the time as there usually isn’t any satellite imagery of the oceans, and in the default view, any such imagery is hidden by default. However, when there is something interesting to see, it is a major problem. 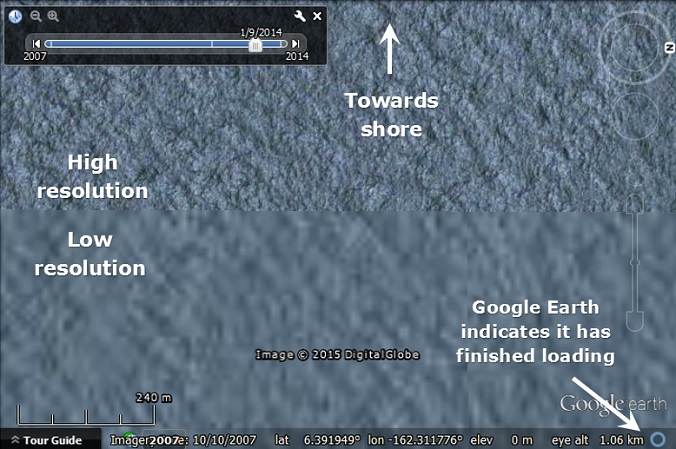 Presumably the high resolution imagery exists in Google Earth’s imagery servers. Do any of our readers know of a way to get Google Earth to load it?

. For best results when viewing offshore satellite imagery, turn off the water surface effect, and if you have Google Earth Pro, turn off the ‘Terrain’ layer.