In March we looked at how Google Earth hides 3D imagery when it is far away. Today we are looking at cases where there are two distinct sets of imagery depending on the distance you are viewing it from.

When you are viewing from a high altitude in Google Earth, the main imagery shown is a composite image created from Landsat imagery. As you zoom in, the imagery transitions to higher resolution satellite and aerial imagery. At what altitude this transition happens depends on your screen resolution. The change is often so subtle that you don’t really notice that the imagery is different. It is most noticeable when there are large changes to the landscape over time, such as farmland and lakes that vary in size with the seasons.

The idea of having a different, better looking global image was first pioneered by Frank using NASA’s blue marble image as an image overlay. Only later did Google incorporate the idea into Google Earth.

Toshka Lakes region in Egypt viewed from different altitudes. Note the extra irrigation circles and a change in the Lake.

For some reason the Landsat imagery doesn’t extend to the poles. The islands of Svalbard and other locations in the far North and much of Antarctica still shows the characteristic strips of satellite imagery even when zoomed out. Nevertheless, there is a change in imagery as you zoom in. Svalbard in particular, shows some dramatic changes in many places.

We have even seen a similar effect in 3D imagery, such a building we looked at in San Francisco, which showed the building in different stages of construction. It seems Google has since modified the settings in that area, so we were unable to see the same effect this time. However, the building does still seem to be a combination of the two models and the crane disappears as you zoom out or zoom in very close. 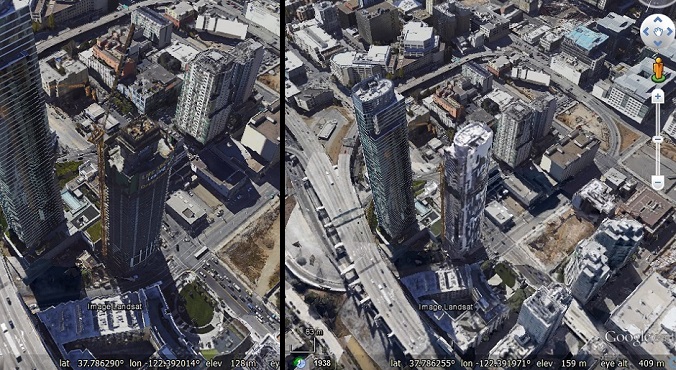 Building under construction and complete. Both models were clearly visible when we looked at it in December last year.

To find the locations in this post and a couple more locations of interest download this KML file.