A couple of weeks ago Frank wrote about changes in Google’s Google Maps and Google Earth organization. Since then, we have also noted that Google is working with Esri, to assist Google Earth Enterprise and Google Maps Engine customers to transition to Esri products. So what does all this mean? Google is generally close-lipped about its future plans, so we can only speculate based on its recent public actions.

It would appear that Google may be considering getting out of the high end Geographic Information System (GIS) business. Google Earth Enterprise is a product that allows customers to have their own Google Earth servers and host their own imagery and layers etc on their own servers. It appears from the Esri website that Google is encouraging its customers to move to other software products. Google Earth Pro, an intermediate product in the GIS space was also recently made available for free. In the 2D Maps space, Google recently deprecated Google Maps Engine which amongst other uses, can be thought of as Google’s enterprise level Maps product.

The latest version of Google Earth on Android, uses a completely new graphics model. It also appears to share the street database with Google Maps. In addition, Google Earth for Android does not show the old type of user created 3D models. It only displays the newer automatically generated 3D mesh. Because of the new graphics model, and presumably new street data model, it is likely that the supporting servers have changed as well. This means the Android version is incompatible with the older Google Earth servers, which explains why the Android version no longer includes the option to log into a Google Earth Enterprise servers.

Google shows no sign of slowing down when it comes to gathering satellite imagery and releasing 3D imagery with nearly 100 additions to the 3D imagery already in 2015. So Google clearly still sees a future for an earth in 3D. 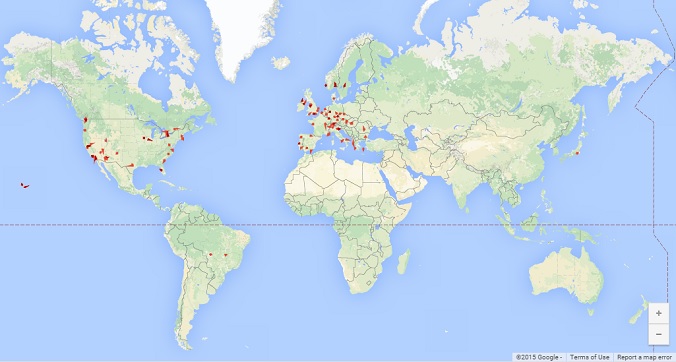 A map of locations that have received 3D imagery so far this year. To find them in Google Earth, use our KML file