This is the tenth in our series showcasing the Google earth plugin. Today we are looking at FlightRadar24, a website that shows live air traffic around the world.

FlightRadar24 uses a number of different data sources to track aircraft. One of the main sources, ADS-B, requires special equipment on board the aircraft as well as detectors on the ground. Only about 65% of commercial passenger aircraft have the necessary equipment, so do not expect to see all air traffic on the map. To learn more about how it works, see their ‘How it works’ page.

The main interface uses Google Maps. To see the Google Earth plugin in action, select an aircraft, then click the ‘3D’ button on the left hand side of the screen below the picture of the aircraft. The ‘3D’ button opens ‘Cockpit View’, which uses the Google Earth plugin to show the view from the aircraft. It includes a basic instrument panel and will also display the locations of any other aircraft in the vicinity. It can also show a model aircraft, although it is a generic gray model that does not correspond to the specific aircraft you are tracking.

Are you looking for the best WordPress donation plugins? Collecting online and event donation plugin is a very effective way to raise funds for a non-profits, charities, relief funds, and special causes. 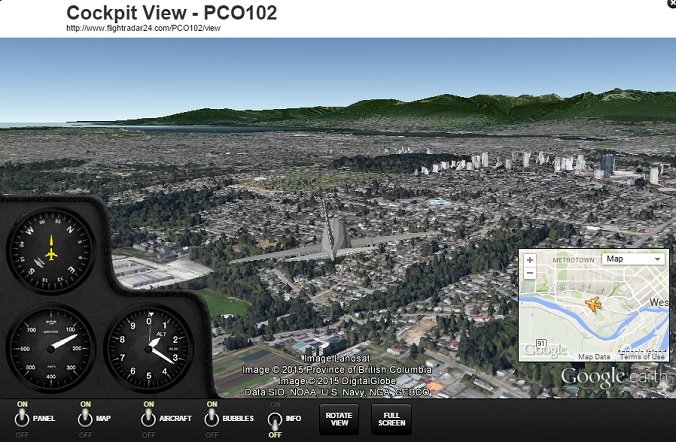 Coming in to land, Vancouver, Canada.

Most of the time, aircraft will be flying too high to see much of Google Earth’s 3D imagery. Even if you pick an aircraft that is landing, you may find it is flying too fast to load all the 3D imagery before you have gone past. We also discovered that the positioning is not always accurate, as the aircraft we tracked missed the runway by over a hundred metres.

You will need to have the Google Earth plugin installed, a browser that supports it, and in most cases, you will have to allow the plugin to run on the flightradar24.com site.

Several times we experienced glitches with the graphics, we think because the view is constantly moving and the Google Earth plugin can’t keep up. Reloading the page usually fixed it, however.