We first told you about YoubeQ nearly three years ago, and they’ve been hard at working continually adding features. 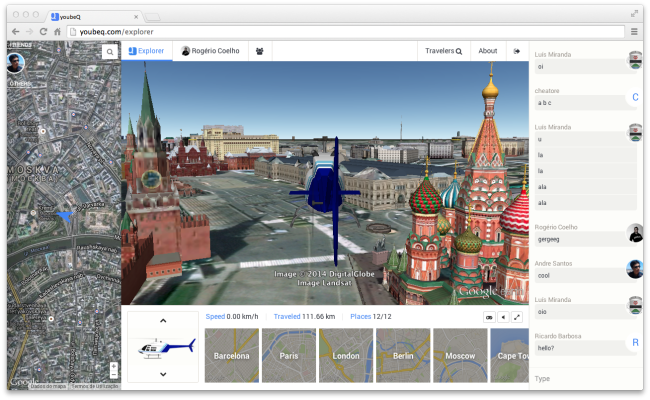 You can try it all for yourself at youbeq.com or read below for their list of new features.

In this new version, we have introduced, for the first time, new foreign languages, besides English. Now, YoubeQ users can also choose either Portuguese or Spanish.

The new youbeQ enables its explorers to travel around the world with 13 different vehicles, from cars, motorcycles, to military or civil planes and even more means of transport such as the jetpack.

The new youbeQ is developed in order to entice the user to run more and more miles. The users who travel more, will be rewarded by unlocking new vehicles and places associated with each of them. The more miles you run, the richer the experience becomes!

There is also a global chat where users may exchange opinions and tips about interesting places and other knowledge.

Whenever you add another traveler as a friend, you may activate the voice connection with him. This allows you to have a completely immersive experience while you explore the earth together.

If you click on the map on the left side (2D), you may add a destination. On the exploiter, you’ll see an arrow that shows you the direction to follow in order to reach the destination you selected. This destination can also be a user and can follow him while he is moving and you are exploring the map together.

The more vehicles you gather and the more unblocked places you get a better score. This together with a complete profile will contribute to improve your score, estimated between 0 and 100%.

The new youbeQ also brought a new sound system that will increase the immersive experience you obtain when you explore the earth.

The new physics engine of youbeQ is a complete revolution. It allows you to have vehicles with separate components (for example, the wheels of the vehicles and lights). In a near future, collisions between vehicles will be a reality.