A lot of people wonder about Google Earth imagery. Why is the image of my house so old? Why can’t I get a picture of my car accident from a month ago? Why doesn’t Google get newer pictures? This article gives a broad perspective about how Google gets the imagery and why it’s hard to get more recent imagery. It also provides you with ways to see lots more imagery built in to Google Earth by showing you where to look. 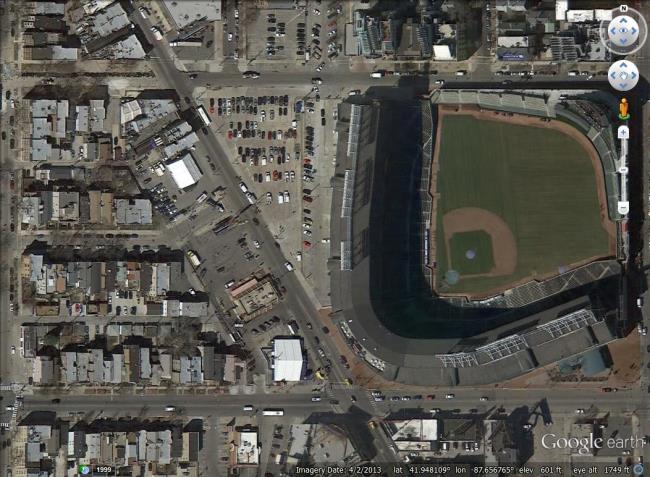 You would be surprised how many people initially think Google Earth (GE) will show imagery in real-time. Or, that surely it will only be a day or two old. I guess part of this thinking comes from watching the news deliver weather satellite photos which are only a few hours old, or spy TV shows with “live” satellite imagery (that’s pretty much science fiction except in rare expensive military operations). But, the problems of getting quality high resolution imagery are very challenging. Weather satellites are at geosynchronous orbits (36,000 km) and take low resolution imagery. High resolution satellites (e.g. those operated by commercial satellite companies like DigitalGlobe or by the government/military) operate just a few hundred kilometers above the Earth. This means they only see a small part of the Earth with their camera as they orbit over. They typically go around the Earth every 90 minutes, but only cover about 1% of the Earth on each pass – but, most of the area covered in a pass is water. Not only that, but imagery for Google Earth is only going to be good if the sun is at a high angle when the satellite goes over (fewer shadows), when there are no clouds, and as little haze/pollution as possible. Believe it or not, the times when all these factors come together are pretty rare. It can take months or years for a good quality image to be taken by satellite even if you pay lots of money!

Once the imagery is taken, it takes time to process the data before it is available to customers. Google is one of these customers (a really big one). Google has to evaluate the new imagery against the current imagery to determine whether the new is better than the current. They have computers to automate as much of this as possible. But, for important areas with large populations the process to check and verify the quality takes time. Once an image is selected, it has to be processed into the format and coordinate system of Google Earth’s databases. Then it has to go through a quality control process and fed into a processing system before it gets distributed to the live Google Earth database servers. This is one reason why you usually do not find any imagery younger than about 6 months in Google Earth and Maps. And why updates usually only happen about once every 30 days.

Another reason why you don’t find imagery that is newer is that it can cost a great deal of money to acquire quality aerial imagery. The companies who spend this money need a way to recover their costs. More recent imagery is more valuable than older imagery. As a result, these companies are reluctant to have their newest imagery available for free for anyone to view in Google Earth. Read the agreements for Google Earth before you try to use its imagery for business applications (more information). You can’t sell or use the imagery from Google Earth for business purposes without permission.

Google has been known to release much more recent imagery in GE for unique events. For example, for the 2008 Beijing Olympics Google released 2-week old imagery for the Beijing area.

However, near real-time imagery of Earth is available in Google Earth! “What?! After all that you are saying it is available?” you ask. Sure, there’s the Weather->Clouds layer. The clouds are actually taken from weather satellites and are a global picture of the clouds as recent as 3 hours old. Ok, so that’s not the kind of imagery you were thinking about? 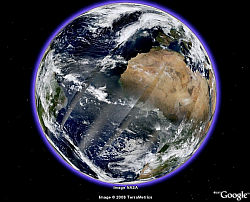 There used to be a cool layer for Google Earth from NASA which showed the entire Earth at a medium resolution (about 250 meter resolution per pixel). The imagery was taken by the MODIS Terra satellite and was processed as quickly as possible and showed the entire Earth between 6 – 12 hours old. The imagery was continuously updating. You could see dust storms, large fires, volcanoes, haze conditions, droughts, floods, and – of course – clouds. This was the most recent, highest resolution imagery of the Earth continuously updating available to the general public, but it’s not available now. But, the resolution was too low to see things like your house or car clearly. There are a few new commercial companies launching multiple low-earth-orbit satellites in an attempt to get more near-real-time imagery of the Earth at at least medium-resolution, at an even more frequent update rate. We’ll be following these efforts closely, and hope layers to view them will appear in Google Earth.

Since Google Earth version 5, Google has the historical imagery feature, so you’re not limited to just the imagery shown by default in Google Earth. Google has archives of imagery from many sources and dates. For many places, Google has 2, 3, or even 30 different images over time for any one location (sometimes decades old). In some cases, you can even find newer imagery than the one shown by default. Usually in a case where the older imagery looks better overall than the newer. The historical imagery feature is a an amazing resource, which I encourage everyone to check out.

Let’s not forget to mention Google’s ground-level Street View imagery which is increasingly available in places all over the planet (viewable in Google Earth and Maps as well as on mobile). But, can also be months or years old for similar reasons (challenges of covering the entire planet and processing huge amounts of data).

Anyway, I hope this article helps provide a better understanding of the imagery in Google Earth and how it all works. This is a high-level overview and is based on my own observations and opinions. Feel free to comment below. (Originally posted Feb 2008)

[NOTE: The 2009 version of this article is also available in Spanish.]