A few years back, Bill Royal completed the “USA Four Corners Tour” on his motorcycle and captured the journey on GPS.  He’s loaded it into Google Earth, which gives a great look at what goes into completing this famous ride. 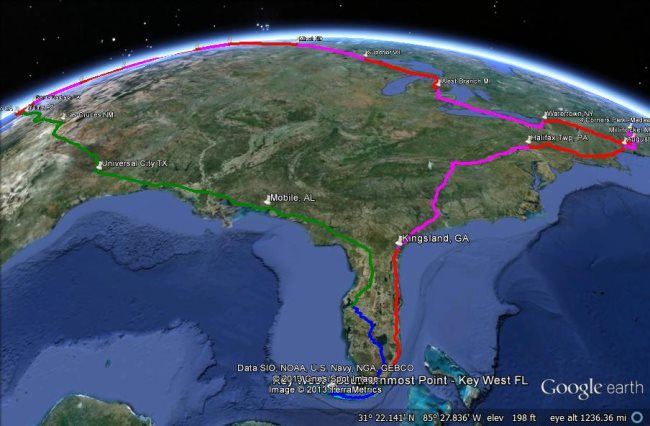 Here is Bill’s write-up of what he did.

Here are the GPS tracks on Google Earth of one of my all time favorite motorcycle trips from back in 2010.

This tour is sanctioned and governed by the SCMA (Southern California Motorcycling Association) and requires one to visit each of the 4 extreme “corners” of the USA in 21 days or less.

My riding buddy Larry and I started our Tour at the Southernmost Point in Key West FL. We proceeded north from there up to Madawaska ME, then west from there to Blaine WA and then south from there to San Ysidro CA to complete the 4 corners. We completed our actual 4 Corners Tour (starting at the 1st “corner and ending at the 4th “corner”) in 15 days, covering 7,665 miles in that time. Of course we had the time and distances to get to the start from home (blue track on map) and then back home from the finish point (green track on map) so the entire trip was 10,544 miles covered in 21 days. For the total trip – we averaged 527 miles per day with our longest day at 846 and our shortest at 380. Each color change of the track (except for the green tack on the homeward bound leg) is one days ride. Our overnight stops are marked by the waypoint markers. We had mostly very nice weather, with the exceptions of heavy rain while getting into Madawaska ME, fog so thick that we skipped the eastern side of the Going to the Sun road at glacier National Park, and we also hit a peak hot temperature of 113 degrees as we rolled into Yuma AZ. Nothing we couldn’t handle and it all makes for the adventure of touring by motorcycle.

I did this trip on my beloved 1991 Honda ST1100 “SilverSTreak” which already had 240,000 miles on at the start. My buddy Larry rode his BMW GS. Both bikes performed flawlessly, requiring only fuel to complete the trip.

I know this style of riding isn’t for everyone, but I just seem to love putting the miles on my motorcycle. Moreover, to see so much of the country over such a small amount of time really helps bring the perspective to the vastness and diversity across our lands. Larry and I are also members of the Iron Butt Association of long distance riders and both of us have ridden motorcycles well in excess of 500,000 miles each over our riding careers.

It might seem like all we ever did was ride, but besides spending time at the mentioned 4 corner points, we also took excursions that included crossing into and back out of Canada (skirting north of Lake Erie), the Going to the Sun road at Glacier National Park (from the west entrance to the visitor center near Logan Pass – the eastern slopes were too socked in with fog), a visit to the Grand Coulee Dam, Crater Lake and National Park, the Redwood National Park, Humboldt Bay, the Humboldt Redwoods State Park, as well as significant portions of the Pacific Coast Highway and crossing the Golden Gate Bridge. All in all it was one fantastic trip that I will never forget.

To see it for yourself, simply download this KMZ file

and load it in Google Earth.