Iran is planning to create a new “Islamic Google Earth” called “Basir”, which they plan to have up and running in the next few months. They also plan to have a data center capacity that will match Google within three years, which is amazingly ambitious to say the least.

Many in Iran consider Google Earth to be a “tool for western spying agencies”, so they appear to be building their own version of “Google Earth” so that they can spy back. From an article on the Guardian website:

“On the surface, Google Earth is providing a service to users, but in reality security and intelligence organisations are behind it in order to obtain information from other countries,” Nami said.

Iran has often looked at western web services with a great deal of suspicion.

Other Iranian officials have echoed Nami in making similar accusations against Google. Iran’s police chief, Esmail Ahmadi Moghaddam, said last year that it was not a search engine but “a spying tool”, according to Fars news agency. Web users in Iran can usually access Google but some features like Gmail or Google Earth have intermittently faced filtering. However, with suspected help from China, Iran blocks access to many search results. Access to more than 5m websites are blocked in Iran.

However, there are many that don’t think this project will happen at all:

An IT consultant who has worked on Iran’s national internet project in the past said the announcement was merely an excuse to obtain funds and secure working contracts for the future.

“They have claimed to run their service in four months and said their data centre capacity will reach Google’s size in three years,” he said. “Three-year project, no business model and only relying on government funding, a piece of cake indeed … To have a data centre with such capacity and security level they need power stations, cooler systems, bandwidth, etc, which will require billions of dollars of investment that doesn’t fit with Iran’s sanctions-hit economy.”

It’ll be interesting to see if this new product launches in a few months or not. Check out the full article on the Guardian website for more.

On a side note: what’s up with the Google Earth screenshot they used for that article (seen below)? That had to have been from version 3.x back in 2005 or so. Interesting that they use an eight-year-old reference image to highlight this article. Based on the image, anyone care to guess exactly what version of Google Earth was used there? 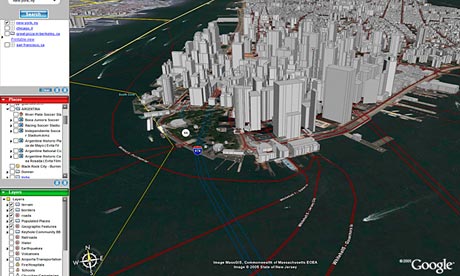