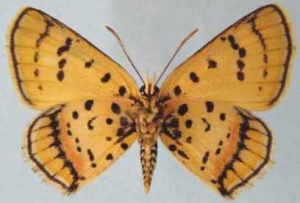 Google Earth has been used many times by researchers to help various wildlife around the world. From elephants to sea turtles to clean-up from the gulf oil spill, Google Earth has proven to be a powerful tool in assisting with these kinds of efforts.
Today’s story comes to us from Scientific American, about how Mark Williams of the Lepidopterists’ Society of Africa (LepSoc) was able to find a specific of butterfly using Google Earth that had been believed to be extinct.

…Mark Williams… was searching the Waterberg region on Google Earth, the 3-D map program that combines satellite data and other information from around the world. He noticed an isolated plateau near the town of Bela Bela, about 50 kilometers from the Waterberg copper’s previously known habitat. Located in the Beteleur Nature Reserve, the habitat matched the original conditions in Alma.
< br />Williams talked with other LepSoc members and found that the reserve had already been searched for the butterfly. He decided to go there anyway for a vacation weekend. That ended up being a fortuitous decision. While walking along a nature trail with his wife on March 2, he struck gold. “We were walking through open grassland and had covered scarcely a kilometer when a small orange-winged insect flew up off the path in front of me, fluttered to the left, and dived into the grass a few meters away,” he wrote in an account to be posted on the LepSoc web site. “I swiveled to my left and my eyes focused on the little creature that sat perched on a grass stem with closed wings. The underside coloring and pattern left no doubt.” It was a Waterberg copper.

It was an exciting discovery for the group, thanks to good timing (a drier-than-normal season), good fortune, and wise use of Google Earth. I encourage you to read the full story on the Scientific American website.