Google Earth has consistently been improving on mobile devices over time and last year’s update to version 6.2 brought a giant new feature to it — KML support.
While Google Earth on mobile supports KML and KMZ files, there still isn’t a native sync between your desktop and mobile versions of Earth. Here are some ways to help you load and view your favorite KML files on your mobile device. 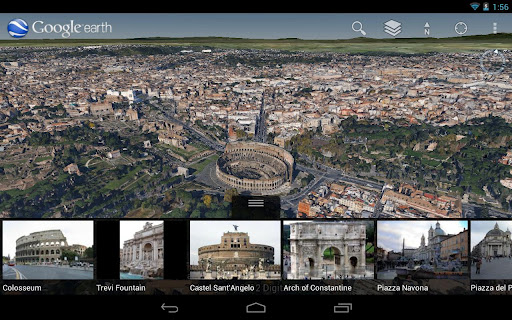 First, of course, find and save the placemarks that you want to view into a KMZ file and save that file somewhere on your computer. From there you have three main options.
1 – Email
The easiest way is likely to just email the file to yourself, then open it from the email account on your mobile device. This should work on most versions of Android and iOS.
2 – Sync it to another application
If you use Dropbox or Google Drive, you can save your file in there, open that application on your mobile device, then have it open the KMZ file with Google Earth. On Android you can also use an alternate file manger such as “Astro” to save and open the file.
3 – Sync it via Google “My Maps”
This last option doesn’t use Google Earth, but is a nice way to view KML content on the go. First, open Google Maps on your desktop and click “My Places” at the top of the left column. Create a new map, select the “Import” option at the top, and then import the KMZ file into that map. After you have saved the it you can open Google Maps on your device and choose the “Layers” button. Look for “My Maps” and you should find your new map in the list and can open it.
Google Earth on mobile is getting more powerful all the time, if for no other reason than because devices are becoming increasingly powerful with higher resolution screens. Google Earth on my Nexus 10 is stunning and will only get better as faster and sharper devices are released.
What is your favorite feature of Google Earth on your mobile device?