Ever since Google Earth was released, it’s been an excellent tool for planning and development. We saw environmental groups using it more than seven years ago, companies using it to plan new roads and much more.
Today we’re going to show you an impressive new tool that was put together by Fugro Consultants with help from the San Francisco Estuary Institute, the Oakland Museum of California, CLEAN South Bay, and many other collaborators.
They have developed interactive creek and watershed maps as KMZ files for the Watching Our Watersheds (WOW) project. These represent creeks, urban drainage network, watersheds, baylands, and points of interest in Santa Clara Valley, California and are available to the general public. 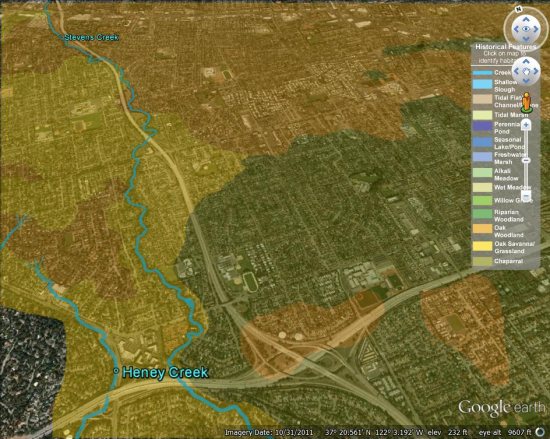 The data has been assembled from various sources and has been migrated and updated into GIS and, even more recently, into KML format, for the area of Santa Clara Valley, thanks to funding by the Water District and others.
The downloadable KMZ files (ranging in size from 3 to 10 MB) are divided into Present and Past and into three areas (Western, Central, and Southern) to keep the file size and the performance in GE more manageable. If you’ve ever loaded a huge KMZ file into Google Earth and watched it slow to a crawl, you’ll appreciate the fact that they split the files up so nicely.
For the most part, the data are in vector format but there are also some image overlays, which may take a few seconds to display when first loaded in GE.
You can learn more and download the KMZ files on the Watching Our Watersheds website, or watch the video below for a bit more info.