When Google first released the Google Earth Plugin API, one of the demos they showed off was a simple game called Monster Milktruck. There’s no objective to the game, but it turned out to be a fun way to travel around in Google Earth and has remained relatively popular over the years. In that time we’ve seen a variety of applications released that used much of the same code, including an Apollo Lunar Rover, Cycling the Alps and a Beastie Boys-themed game.
The latest is a game called Zeptoblaster

that takes it to a different level. 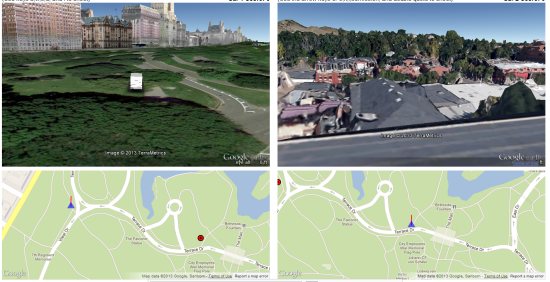 Among other things, it creates two instances of the Google Earth plugin and allows you to play alongside a friend and try to shoot them with the blaster attached to your truck.
Part of the beauty of the game is that it includes collision detection, so you can see when an explosion hits your opponent. We’ve seen collision detection in other games before, such as Paul van Dinther’s “Drive the A-Team Van“, and it’s a nice touch in this game.
As posted by Keir at Google Maps Mania, the technology behind the game is quite solid:

One of the most impressive features of this game is the collision detection developed by John, which detects when a player’s missile has hit the enemy truck. This collision detection works by creating bounding boxes for the 3d collada models of both milk trucks and for all of the missiles. It is then a simple process of detecting when the bounding box of a missile intersects with the bounding box of a truck (actually it isn’t simple and actually involves a very complicated algorithm).

It’s a great little game and you can try it for yourself at knowledgecrazy.com/zeptoblaster.