Rally Navigator is a program that helps rally riders create printable navigation instructions called roadbooks, used in Cross Country Rally events such as the Dakar Rally. The fun part is that the rider might not know where he is going and needs to follow the roadbook instructions to the letter while the route leads the rider through landscapes otherwise never seen. 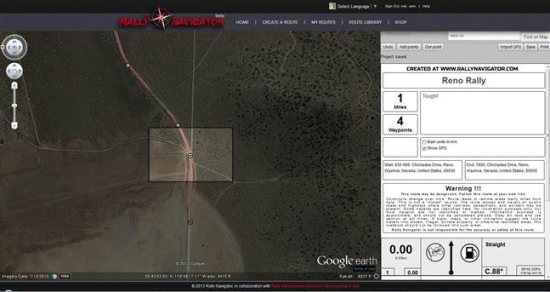 Mike Shirley is a rally rider and owner of Double Diamond Athletic Club in Reno, Nevada. He already used Google Earth to design his roadbooks but the process was cumbersome. Mike asked Paul van Dinther at Planetinaction (creator of the A-tour, Ships and much more) to take this roadbook production process to the next level, and they did.
The Google Earth based Rally Navigator uses an intuitive user interface to either import gps tracks (gpx format) or allow users to virtually lay out a route by tracing satellite images of roads and dirt tracks. Wherever the rider needs turn instructions, a point is promoted to a waypoint by a single click which causes it to be included in the roadbook printable output.
Individual user accounts allow off-road enthusiasts to create routes that can be kept private, shared with select friends or published to the whole world. Today anyone will be able join Rally Navigator and start to create and share rally roadbooks. Bear in mind that anyone can have fun with roadbooks. It doesn’t have to be about speed.
All interaction is immediate and in real time thanks to the power of HTML5 canvas. A stylized map drawing, along with compass heading and segment distance is automatically generated to detail turn instructions for each navigation waypoint. Users can interactively further detail the waypoint with custom road drawing tools to create “tulip” images and adding internationally standardized symbols which can all be sized and rotated to more accurately resemble the real life waypoint along with a simple text description.
Technically this project provided entirely new challenges. The Google Earth API is not fast when creating items in Google Earth. This caused a project containing a few thousand points to have a load time of more then 5 minutes! It took some serious wizardry in the form of batch loading to overcome these limits. Importing GPX point data to Rally Navigator is optimized using a newly developed algorithm causing distance errors of less then 0.2%. A point count reduction of 85% is possible on certain gpx files that are recorded at a high frequency.
Some of the features in the new beta include:

Here is a brief promo video that shows more:


Their goal is to build a community of off-road motorcycle enthusiasts working together to create and share a worldwide library of interesting roadbook routes, growing the sport of cross country rally and dual sport riding.
New Rally Navigator features in development:

There still have a lot of work to do to fulfill their vision and they would appreciate any advice you may have regarding function, additional features, bugs etc. Please use the feedback widget located on the left side of the screen to submit your thoughts.
Note that Rally Navigator works BEST on Google Earth 6.2 on Firefox with the IPC controls disabled. Check it out for yourself at RallyNavigator.com.