We’ve discussed the groundbreaking “Powers of Ten” film here on GEB a few times. Created 35 years ago by Charles and Ray Eames, it was an amazing film that showed the size of our universe from the very largest to the very smallest scales. Here’s the nine minute film for those that haven’t seen it before:


Slate recently took a look behind the scenes of the film with some great insights into it. While assembling a video like that would still take a good bit of work today, it was amazingly painstaking 35 years ago. Simply capturing the imagery was quite an undertaking, as explained by Alex Funke:

“We contacted the Chicago Aerial Survey and commissioned a series of three large-scale photographs to be taken on a sunny day,” Funke explains. “For the widest shot, they went up in a pressurized high-altitude plane, a Cessna, which was really high. Later at the office we received the images on Ektachrome positive film, captured with these gigantic aerial mapping cameras

Once captured, here’s how they pulled it together:

Next came the challenge of shooting the still photographs with a motion-picture camera in a way that conveyed constant acceleration. The solution was ingenious. They opened on a close-up of a 3-inch photograph of the picnickers on the grass, which had been carefully glued into the center of a 30-inch photo that showed a much wider view of Chicago at the next “power.” The camera then tracks back from the 3-inch photo until the edge of the larger 30-inch photo is reached. Cut. The 30-inch photo was then shrunk down to 3 inches, placed into the center of the next “power” and the process repeated itself until the last link in the chain–1024, the image representing the distance of 100 million light years–was reached.

It’s quite an amazing article and I encourage you to go read it.
You can also explore the Powers of Ten via this KMZ file

that Richard Treves created a while back. 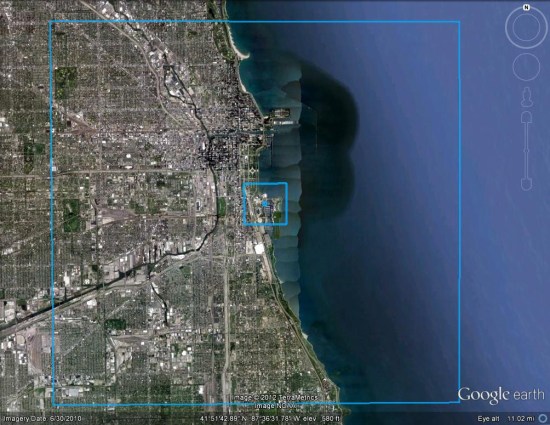 Not only can you experience part of the “Powers of Ten” in Google Earth, but the film was part of the inspiration for the original Keyhole project that later became Google Earth!