The California Air Resources Board (CARB) collects a lot of data on greenhouse gas emissions in California, and has just released a new system that allows of easy visualization of that data. By putting the data in Google Earth, you can quickly visualize the emission levels for any of the 625 facilities in the state. 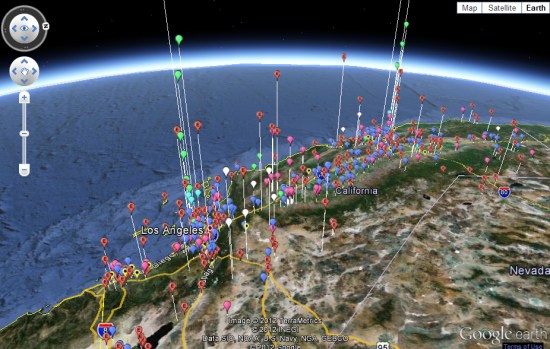 You can view the data for yourself using their Facilities and Emissions Visualization Tool.

While I’ve seen examples over the years of solid data being shown in 3D for no apparent reason, this is an excellent use transforming their data into a 3D map. By quickly glancing at the state, you can get an excellent feel for which areas are emitting the highest level of gases.
There is quite a lot of data in these maps, and they’ve built a short tutorial video to show you all of the features available.
From their news release:

“Knowing the exact quantity of greenhouse gas every major source pumps into the atmosphere is the foundation of an effective cap-and-trade program,” said Mary D. Nichols, ARB Chairman. “Thanks to our rigorous reporting program we know the amount of greenhouse gases each source emits down to the ton. This new application provides an easy way to pinpoint those sources on a map, and allows everyone to see at a glance how it compares to other facilities in the same county, or throughout the state.”

The new application links ARB’s database of the state’s largest sources of greenhouse gases with Google’s mapping technology, including satellite photography that shows details of each facility. The Google Earth module features a graphic representation of the relative size of each facility’s annual greenhouse gas emissions in relation to others throughout the state.

The application allows viewers to choose which sources they wish to see by sector (such as only choosing cement manufacturers, refineries, or power stations) and also displays specific counties, air basins and air districts. The application also shows six out-of-state facilities that provide some of the electricity imported into California.

(via treehugger and +Google Earth)