+Jens Graikowski is taking a virtual trip down historic Route 66, from Chicago all the way to Los Angeles, by following Street View and using Google Earth to explore the areas along the way.
It’s not just a quick fly-by, though. He’s taking his time “driving” down the road, connecting with locals via Google+, and sharing ideas, photos and restaurant suggestions as if it was a real journey. By literally working through all of the Street View imagery along the way, he’s treating it as if it was an actual trip. For example, he mentions how a bunch of segway riders were following him around for a while, so he “ditched” them on his way toward Soldier Field. 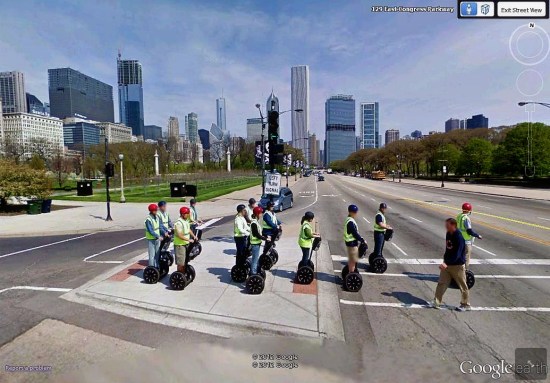 It’s certainly a unique way to travel down a highway, and only recently possible thanks to the ever-expanding Street View coverage. His first post is a great example, as he describes sights found in Street View, shares the “road trip” music he was listening to, and makes up a story to go with it.
He’s nearly a month into the journey and just a fraction of the way to Los Angeles, so the end result could be quite a comprehensive look at Route 66 through the eyes of the Street View camera. You can follow his entire journey via Google+ by using the #jgroute66 hashtag.
While his trip is something most of us wouldn’t do, it helps to show the power of Google Earth and Street View when you want to explore a new area. When meeting a client at a location that I’m not familiar with, I almost always pull it up via Earth and Street View so I can have a good idea of what I’m looking for. As image quality continues to improve in both products (not to mention the new 3D Imagery), this will become an even more useful thing to do.