Google’s new 3D imagery is pretty awesome. It allows Google to model every detail of full cities more quickly than in the past, and it provides consistent coloring and lighting to help make things look more realistic.
While the new 3D imagery looks pretty good on the outside of buildings, what about the inside of them? We first discussed this back a few years ago when PeterG modeled the inside of the Leku Chillida Museum, and again when we took a look at the interior of Allen Fieldhouse at the University of Kansas. I was reminded of this thanks to +Andrew Leahy when he showed off the amazing interior of Ellicott Square in Buffalo, NY, shown here: 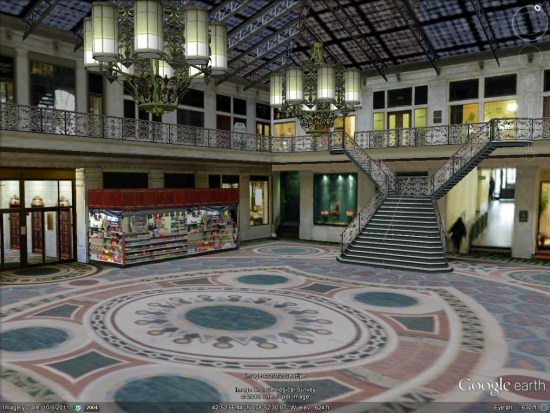 There are two main possibilities in the future, and hopefully we’ll see both of them.
Multiple 3D Layers
As we mentioned when it first came out, we’re hoping Google allows users to toggle between the layers in Google Earth: show 3D imagery if they want, or switch back and few the standard 3D terrain with 3D buildings sitting on top of it. With this system, we’d still be able to see these excellent interiors.
They’re sort of doing that already on Android, where you can toggle a few layers to view it either way.
Street View Interiors
This seems to be the most likely way they’ll handle interiors of buildings using the new 3D imagery — click a building and be able to explore the interior using Street View technology. Google has really been pushing this lately via their Business Photos, and it’s been expanding very rapidly. While you’re a bit more constrained while using Street View instead of the free-roaming ability inside of a 3D model, the level of detail and ease of creation of interior Street View will be tough to beat.
You can sort of do that in Google Earth right now, but it takes quite a few clicks to get there. I expect we’ll see much tighter integration of that very soon, with or without the 3D imagery.