At yesterday’s “New Dimension of Google Maps” event, Google pre-announced several new features planned for the Google Maps and Earth for mobile platforms. These features aren’t available to the public yet – which is unusual since Google rarely talks about future plans. As we mentioned yesterday, this event was very likely done as a precursor to Apple’s iOS6 event next week, in which they are expected to announce that Google Maps will no longer be the default mapping application on iPhones. Apple has been acquiring companies and quietly building their own mapping applications. While that might sound like a bad thing on the surface, this competition will benefit us greatly as end users. Look no further than the iPhone vs. Android relationship, and how both parties are working feverishly to make their product better than the other. This kind of fight among mapping companies could help keep up the pace of technology advancement for all of us!

Improved 3D buildings
Over the coming months, Google will be rolling out a new style of 3D maps, generated via stereophotogrammetry from aerial imagery. We knew that Google would one day create better auto-generated buildings, and that time has come. The result will be remarkably sharp 3D, in a format that can be more quickly rolled out for large areas. Google’s Peter Birch expects this new technology to cover “communities of over 300 million people” by the end of the year. This will start on mobile devices, and they “hope to announce a desktop version as soon as possible” (details in this Google Groups thread). According to the announcement, this new 3D data will be for Google Earth for mobile only initially. 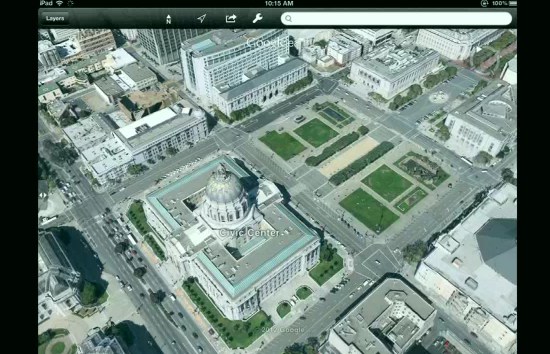 As we questioned yesterday, combined with the sale of SketchUp, what does this hold for the future of 3D modeling? SketchUp Island has a great post that asks the same question.

While the new auto-generated buildings will effectively supplant the current 3D buildings for Google Earth for mobile for some major cities, the old 3D data will not necessarily be taken away on the desktop version of Google Earth. Ideally, Google will leave an option in the Layers area to allow users to choose to use the new mesh data, the old 3D buildings, or no 3D buildings. This is the way Google has handled such things in the past. They’ve not revealed their actual plans in that area for Google Earth yet, but we should find out soon. Allowing the old data as an option on the desktop version of Google Earth will also be important to maintain Google Earth API applications.

Microsoft had been working on auto-generated 3D imagery in Virtual Earth, though they’ve since abandoned it. Their results were quite impressive at the time, as we showed in this post comparing Google Earth and Virtual Earth in Denver. Google’s new imagery certainly looks much better than what Microsoft had to offer, but the general concepts are similar.

Here’s a video that shows a bit more about the new announced 3D imagery:


StreetView Trekker
The StreetView Trike allows Google to reach a lot of remote areas, but some areas are simply too remote. Now they have the “StreetView Trekker”, which is essentially a StreetView back pack. At only 40 pounds, it will allow them to go almost anywhere and easily add fresh imagery to StreetView. 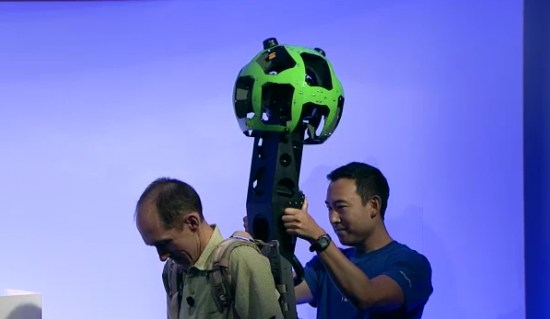 Offline Google Maps for Mobile
Soon you’ll be able to download any map onto your Android device for offline viewing. This way you’ll still be able to use the map if you’re in an area with no data connection. GPS is world-wide, of course, and therefore will still work when you’re using an offline map.

Here is a video that provides an overview of some of the new features announced yesterday:


For more, you can read the blog entry on the Google Lat Long Blog.