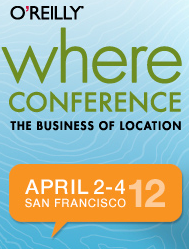 My day began by going to the Getting Started with the Google Maps API presentation from Kathryn Hurley and Andres Ferrate. While I’ve certainly used the Maps API quite a bit over the years, a refresher is always a good idea. They’ve created an excellent Code Tutor to walk through the basics of their presentation. If you’d like to learn more about using the Maps API, that’s a great place to start.
Next was Building Imaginary Worlds: SketchUp and Custom Street View from Mano Marks and Adam Hecht. It was a neat combination of those two tools, showing how to create a building with SketchUp and then add the model to a custom Street View to easily allow other people to view it. Mano has created a custom Ruby script (which he’ll be releasing later) to quickly capture 8 images of his model in SketchUp, stitches them into a panorama with Hugin, then adds them to a custom Street View via the Google Maps API. It’s pretty slick.
After lunch I went to see Sean Maday (Google) and Deke Young (GeoEye) and their presentation on Leveraging Google’s Consumer Mapping Platform in the Enterprise. He spent a good deal of time showing off the features available in Google Earth Builder, a powerful business tool. A good demo sample that he showed off was from gis.frederick-county.org. Another good example was from when they shot imagery at Utah State University via a small blimp, then processed it via Google Earth Builder. You can view that imagery at sigacts.com/USU.
Sean also dropped another fun stat on us — during Christmas Eve 2011, the NORAD Santa Tracker peaked at over 1.6 million queries/second. Wow!
There were quite a few other sessions during the day, but those were some of the highlights. I’m heading out for day two and I’ll fill you in on all of that tomorrow. You’ll be able to live stream of the keynotes today, so be sure to check that out.