Over the past few months, Colin Hazelhurst has brought us a variety of excellent tours of Captain James Cook’s various expeditions, such as his exploration of Australia. Colin has since built a tool on his website that helps you to create similar tours of your own. 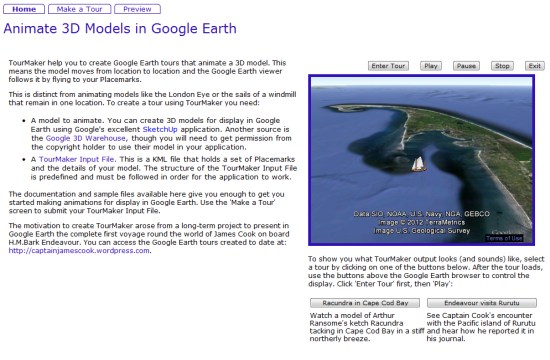 It requires a bit of KML coding, but certainly simplifies the process from what he had to go through. You can find the tool on his site here.
Another cool thing we’ve just found is Harrisburg University and their use of the Google Earth Diorama. I believe they’re the first major site to really dig into the Diorama, and the result is quite impressive. 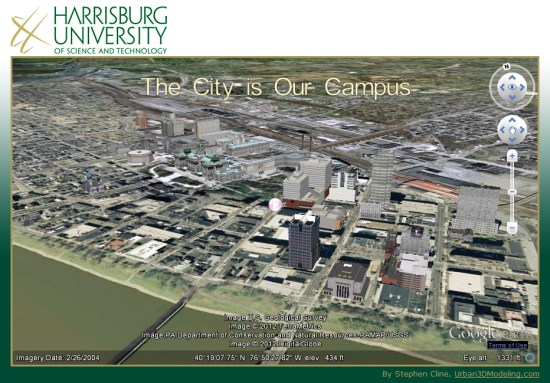 They make excellent use of the Diorama tool, incorporating an audio narrative, photos, videos and text throughout the site. It’s very well done and it’s a neat way to explore their campus. You can view the Harrisburg Diorama at urban3dmodeling.com/HarrisburgU.html.

Here’s what Steve, the author of the Harrisburg University Diorama, had to say:

I started modeling for Google Earth in 2010 and started Urban 3D Modeling in 2011. I have always loved all things Google Earth so naturally 3D modeling became an interest of mine. When I discovered the Diorama tool, I immediately realized the potential as I started to envision great uses for it. Being able to weave a story, information, and rich media into the visualization of Google Earth in an easy-to-use interface grabbed my attention.

This project I did for Harrisburg University falls in line with the school’s campus slogan: The City is Our Campus. The diorama tool is an excellent way capture and explain this slogan within Google Earth. The diorama tool can be an engaging visualization solution for universities, resorts, and historical places. I would love use the diorama more often in my future projects.

If you make use of either one of these tools on a project of yours, please let us know so we can check it out.