This weekend marks the 100th anniversary of the Titanic’s collision and subsequent sinking in the North Atlantic Ocean. Today we’ll take a look at the journey that led to the iceberg, and tomorrow we’ll explore ways to view the ship as she sits today at the bottom of the ocean.
GPSed.com has a great track of the voyage of the ship. You can view it on their site or download this KML file

to see it in Google Earth. 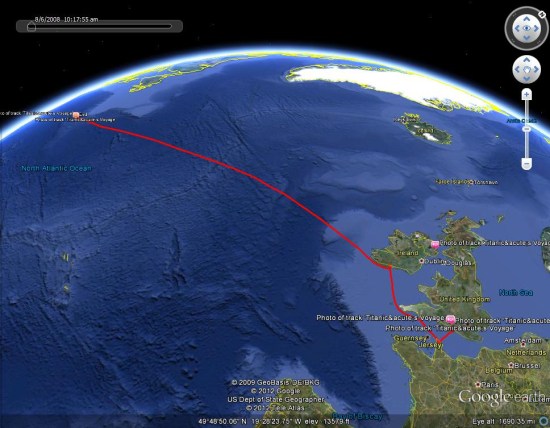 3D Warehouse users ‘DannyDijk’ built a nice 3D model of the ship while it was beginning to sink. The elevation seems a bit off (the ship is floating in air), but the model is very well-done and is worth checking out. You can view it in Google Earth by using this KML file. 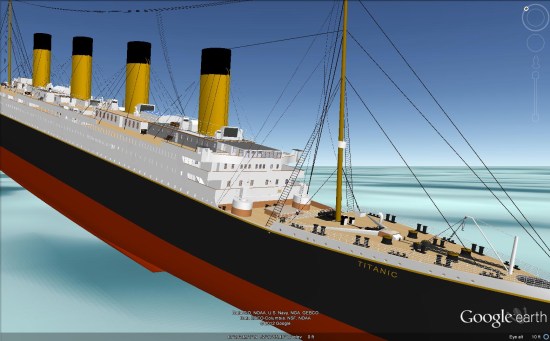 The best model I’ve seen is likely from user ‘fsmdf’. His model is only available for download to SketchUp and can’t be viewed directly in Google Earth, but he created a video to show how it was created and it’s nothing short of amazing.

At the end of the voyage, of course, the ship broke into two pieces and sank. James Cameron went to great lengths to portray the sinking the ship as accurately as possible in the 1997 Titanic film, but has since discovered some errors. While he is not going to correct them in the 3D remake of the movie, he’s released a revised CGI animation that is thought to be the most accurate rendering of how the ship went down.

There are two major differences in the new rendering from the original movie. The first is the angle of the ship when it breaks. It’s now thought to have been just 23 degrees, but was shown at a considerably higher angle in the movie. The other change is the way the bow of the ship sank; in the movie, it stands straight up and holds for a few seconds, then begins to sink. The new rendering is similar to that, though it doesn’t quite go vertical and certainly doesn’t hold in that position. All in all, it’s a very interesting way to view the sinking of the ship.