A few months ago, we showed you Colin Hazlehurst’s excellent tours of James Cook exploring New Zealand and South Island, New Zealand. Colin is back with a new presentation and it’s simply amazing.
This time his presentation covers Cook’s exploration of Australia from April 18 – August 23, 1770. The presentation contains over five hours of animation with audio accompaniment, and is split into 17 tours. You can load the KMZ file here

, but be aware that it may be somewhat slow to load each segment due to the detailed models and large audio files.
Below is a quick look at what is contained in the file, as written by Colin.
Approaching Australia on 18Apr1770 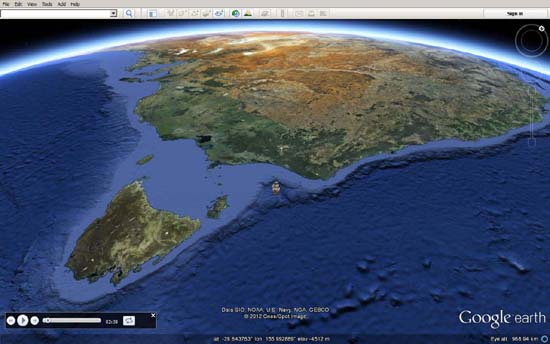 On the 18th of April, 1770, the crew of Endeavour saw Pinatado birds, a good indication of the nearness of land. Their navigational instruments also showed them to be to the west of Abel Tasman’s longitude of Van Diemen’s Land (present day Tasmania), so they couldn’t be far from a landfall. The following day Lieutenant Hicks was the first to sight land and Point Hicks is named in his honour. Cook’s plan, agreed with the other officers, was to explore the coast of New Holland (present day Australia) to the northward. He was very keen to determine whether or not New Holland was connected to New Guinea, a point of much discussion among geographers.
First attempt to land on 28Apr1770 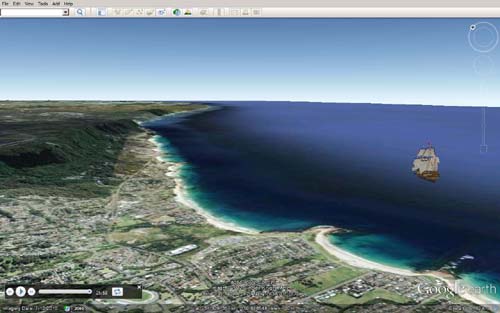 On 28th April, some people were seen on the beach and an attempt was made to land and communicate with them. However, the people ran off into the woods and Cook was further frustrated by finding the surf too powerful for him to land safely. The following day, Endeavour arrived off a large bay in which Cook decided to anchor. The first name of this inlet was Stingray Bay but Cook later amended this, writing in his journal: The great quantity of plants Mr. Banks and Dr. Solander found in this place occasioned my giving it the name Botany Bay.
First landing on Australian soil on 29Apr1770 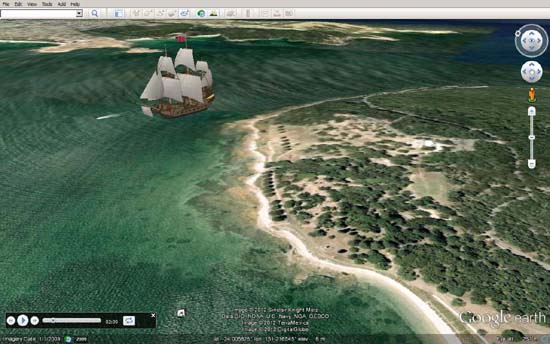 The crew of Endeavour stepped ashore on 29Apr1770. They stayed about a week, resupplying the ship with wood and water, and fishing in the bay. The first interactions with the aboriginal people of Australia were not happy; darts were thrown and muskets were fired.
On leaving Botany Bay, Endeavour worked her way northward with Cook surveying and charting the prominent features as they sailed. One thing he wasn’t aware of was the presence of the Great Barrier Reef and the way that it grew closer and closer to the land the further north they sailed.
Whitsunday was on 04Jun1770 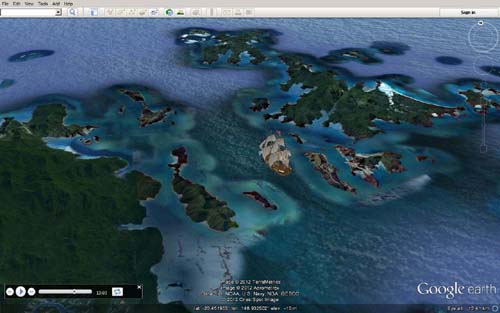 Cook was impressed by the number of safe anchorages there seemed to be in Whitsunday Passage, the strait of water they discovered on 04Jun1770. Beyond this point, the sailing still seemed to be straightforward; the ‘knowable unknowns’ became known to the north of Cape Tribulation, named by Cook: ‘because here began all our troubles’. He directed the ship to sail offshore in order to avoid some islands ahead. They narrowly missed hitting the Pickersgill Reef, but an hour later, at about 11pm on 10Jun1770, they ran aground on Endeavour Reef.
Aground on Endeavour Reef (10Jun1770) 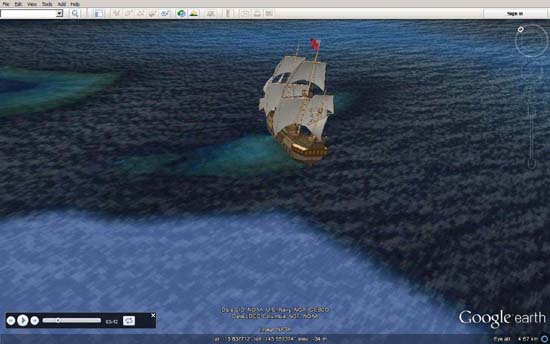 It was fun for me to animate the ship running aground and the attempts heave her off, but less fun for the men on board who were divided into two teams – one working full time on the pumps and the other throwing heavy items overboard (over 50 tons were ditched in the oggin) and heaving on anchor chains in an attempt to pull her off the reef. The story is one of calmness and bravery under extreme stress.
Once hauled off the reef, two high tides later, the ship was fothered, a process that involves treating a spare sail with oakum and wool (and other items like sheep’s dung or ‘other filth’), and passing the sail under the hull, using ropes to position it over the hole. In this way the ship was patched up temporarily and they were able to sail along the coast to find a place for more permanent repairs. They found this in an estuary to the north, which Cook named Endeavour River.
Beached in Endeavour River on 22Jun1770

In the tour, I couldn’t resist flying to the same viewpoint as this engraving by Johann Fritzsch (1786). Either Fritzsch has his Vertical Exaggeration set to 2.0 or the scale of the model in the tour is too great.
Endeavour remained in this anchorage until 05Aug1770, following which they sailed cautiously northward. They were surrounded by shoals and reefs and advanced very slowly. Cook estimated that they travelled over 1000 miles with a man in the chains, sounding, or with one or more of the smaller boats ahead seeking out the safe channels.
They made a decision to try to get outside the reefs which surrounded them. They could see the Pacific ocean swell pounding on the outer edge of the reef and throwing up huge breakers, and longed to be in that deeper water.
Cook’s Passage near Lizard Island 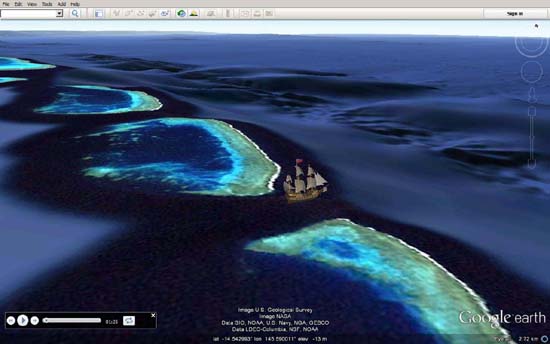 They finally achieved their aim by sailing through Cook’s Passage, an opening in the outer reef near Lizard Island, on Monday, 13Aug1770. They stood off north-east until daylight the following morning, and then headed north-west and west. Cook was determined not to miss the northern extremity of New Holland.
A few days later they were in serious trouble. In an area where the currents were strong it fell quite calm, and a sailing ship without wind is at the mercy of the currents. They found themselves being carried ever closer to the reef – a shear wall of coral rock – with nothing to prevent them being smashed to pieces. Again, calmness under pressure was required. The smaller boats were deployed to pull the ship’s head to the north, and with the help of the tides and a few very light airs they managed to find a way back inside the reef system, calling the opening they found Providential Channel. Cook wrote:
‘It is but a few days ago that I rejoiced at having got without the reef; but that joy was nothing when compared to what I now felt at being safe at anchor within it.’
Providential Channel (16Aug1770) 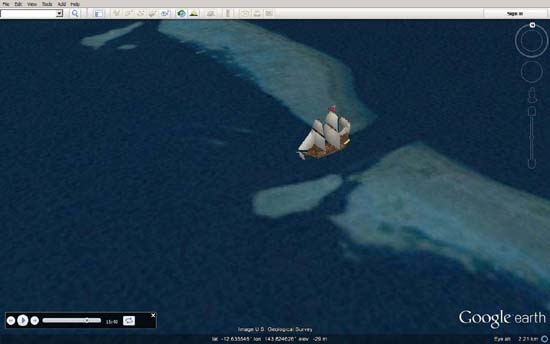 The new plan was to stay inshore and dodge all the shoals and reefs they they were becoming expert at negotiating. By the end of the following week, Cook had found the northern extent of New Holland (Cape York) and a passage through to the Indonesian seas which is now called Endeavour Strait. By this, he had demonstrated to his own satisfaction that New Guinea was an island.
“I could see no land between south-west and west-south-west.” (Endeavour Strait on 22Aug1770) 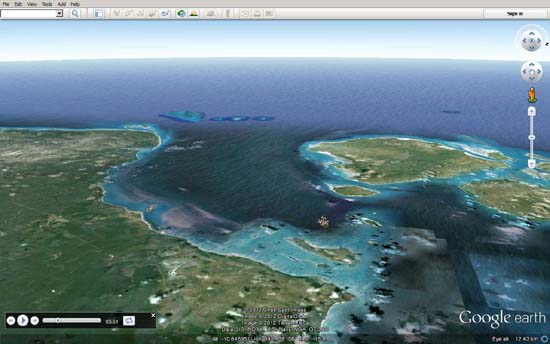