A few weeks ago we showed you Peter Olsen’s 3D tour of the Costa Concordia. It was a very impressive file, showing a 3D model of the ship as it progressed through its fateful voyage.
Peter has been hard at work since then, and we simply had to show you the file with his latest updates. He has rebuilt the ship model from scratch, added much more data to the timeline, built 3D lifeboats (which slowly descend into the water), and even a 3D helicopter to show how the rescue operation unfolded! 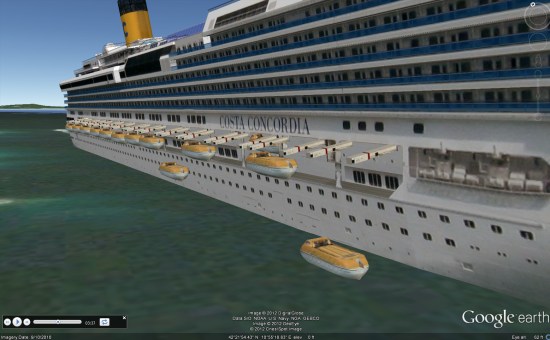 As you may recall from Peter’s work on Stone Mountain and the MLK Memorial, his attention to detail is incredibly high. If you’re curious where he got some of the data used in this animation, here is a list:
• The general conversation between ship and harbour master and times is from here.
• The specific conversation between the captain and coastguard is here. (his version is slightly abridged)
• Some of the timeline is from here.
•The AIS track data is from here.
• The list of dead and missing came from here, which is now a dead link, as well as here.
•The chaotic way the lifeboats departed is from here.
• The helicopter is an exact replica of the real one used in the rescue – call sign VF-57. It is an Agusta Bell ab412SP Air Ambulance, based on the Bell 412. It was manufactured under license by Agusta for the Italian Rescue Service. The photo at the end just before the list of names shows the actual helicopter hovering over the ship. The general line of Bell helicopters of the family, including the Agusta’s is here.
• The Bell 412, with size specifications, is here.
• The shape of the helicopter is here.
• The actual VF-57 helicopter is here.
• A video of an identical model (call sign VF-67) is here.
To see it for yourself, you can download the file from the 3D warehouse or watch the video below: