We all know that Google Earth is great for visualizing an amazing array of information. However, sometimes it won’t support a need that you have and a creative solution must be found. Such is the case today with Skycomp and their “traffic flow visualization” tool. It’s no surprise to us that Paul van Dinther from PlanetInAction.com is the guy that made it happen — he’s built some amazing applications over the years, including the focus of yesterday’s post on the cruise ship Costa Concordia. His solution to help Skycomp is quite innovative. 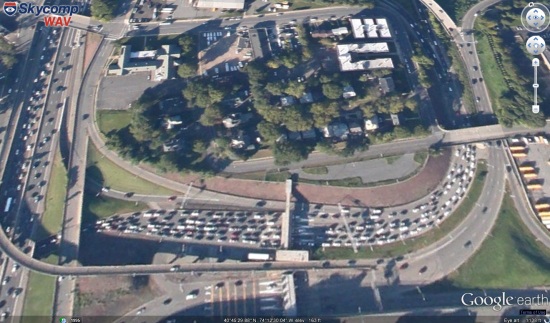 There are two main components that come together to make this happen.
First you have Skycomp, who have found a cost effective way to collect aerial footage of the same location over a sustained period. This involves maintaining an accurate position of the helicopter and complex image alignment and correction.
Secondly you have the Google Earth component. The imagery produced by Skycomp typically is taken at a 1 or 2 second interval and turned into a video. Unfortunately, Google Earth is not equipped to render video on the ground. So instead, Paul uses a sequence of ground overlays and individually turns them on and off using javascript and the Google Earth API. The application is designed to play back several minutes of footage of a busy intersection so a traffic flow analysis can be done. In order to produce a smooth looking playback the application actually fades the next image on top of the previous image. The amount of cross-fade can be reduced for more detailed frame by frame analysis. It’s quite an impressive result.
You can try it for yourself by visiting www.planetinaction.com/skycomp/.

If you’d prefer, here’s a video that shows off how the system works:

For more info, check out the latest edition of the Skycomp newsletter.
The next stage of the application will introduce the capability to export the animation as a KMZ file for playback on Google Earth Desktop using the tour mechanism, which would be quite impressive and very useful for people in this field.