Starting around 2am EST tonight, Santa’s journey will begin and NORAD will once again be tracking his every move!
His journey will be tracked using a variety of methods including satellites, radar and fighter jets. 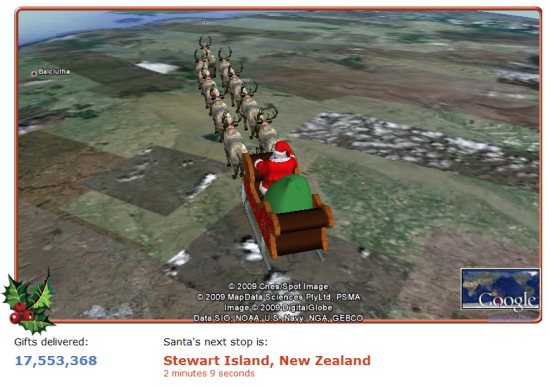 You can view the main Santa tracker here

. Unfortunately, it only runs in the Google Earth plugin in your browser (not in the desktop version of Google Earth), and you can’t make it full screen so you are stuck with a smaller image. It would also be nice if you could view it on your tablet version of Google Earth. But, read on for other ways to follow his journey throughout the day.
Here’s a “behind the scenes” video from Google’s Bruno Bowden on the origins of the NORAD Santa Tracker:


There are a lot of great ways to follow him on his journey, thanks to the folks at NORAD and some help from Google:
• Watch his progress on Google Maps. Visit noradsanta.org to see a map of his location and his next scheduled stop.
• Watch him fly by using the Google Earth Plug-in. Visit the “Track in Google Earth“

page to watch Santa fly by using the Google Earth Plug-in. The past few years I fired up this page on my netbook, placed it up on the mantle, and we kept a close eye on Santa all day long.
• New this year; follow Santa with OnStar. If you have a GM car with OnStar, you’ll be able to push the OnStar button and get an update on Santa’s location (more info).
• Follow his progress on your phone. Search for [santa] in Google Maps for Mobile, or visit m.noradsanta.org from your phone to track his progress while you’re on the go.
• Follow him on other services, such as his YouTube channel, Twitter account and Facebook Page.
Having NORAD track Santa has been a tradition for decades, and using Google Earth/Maps to track him has quickly become a popular tradition of its own. Millions of people track Santa using these fun new methods, with more joining in every year. Have fun!