While we’ve seen various 3D social networks in the past, such as Second Life and Google Lively, YoubeQ is the first social network that exists inside of Google Earth (via the Google Earth Plug-in). We’ve see things like simple discussion forums and a simple MMORPG, but this is the first one I’ve seen that allows such live interactions inside of the Google Earth environment.
YoubeQ puts you on a Segway to drive around the globe, with the option to quickly teleport to any location that you wish to visit. You can click on other users to chat with them, collect stamps as you travel the globe, and it has a variety of other features (with many more coming). When you start the game, you’re placed in front of some billboards in New York’s Central Park that show you the basics of the game: 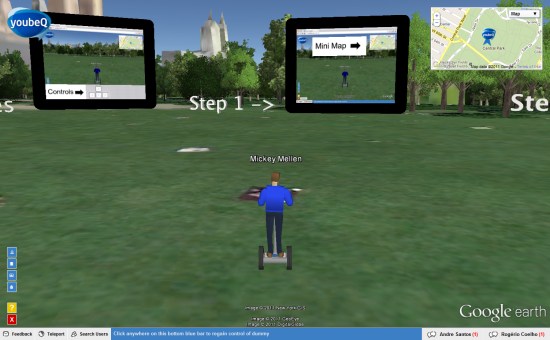 The game displays all 3D buildings and trees in Google Earth, making it fun to explore. Like the “Drive the A-Team Van” game, the buildings have collision detection on them which helps make things more realistic. However, I found a few cases where I teleported inside of a building (try going to “Atlanta, GA”) and I couldn’t get out. 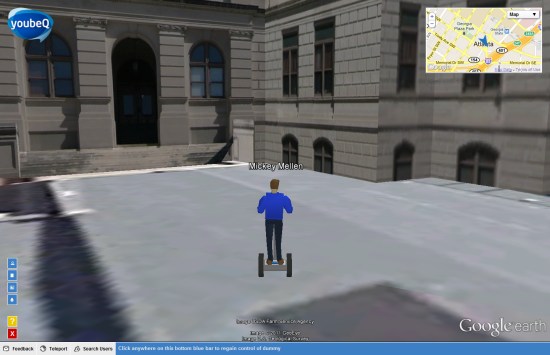 I tried various Atlanta landmarks to teleport my way out (“Georgia Aquarium”, “Turner Field”), but was stuck inside all of those as well! I finally escaped by teleporting to “Georgia Tech”, which put me in a field near the campus.
Minor hiccups aside, it’s a well-built game. It’ll be interesting to see how it develops once it has more players scooting around in there. This info from the developers helps to explain some of the features a bit more clearly:

The users will have the possibility to connect to each other, to talk in a chat, move together exploring the cities in 3d and have access to a range of applications inside the platform.

You will be able to recreate reality or create a new one over the world we know. You are going to communicate and share information in a revolutionary system, at the same time you create your own profile and promote yourself.

To chat with other users you just click on their avatars. It is possible to find users by name or e-mail, and start to chat immediately with them. The user can also teleport himself wherever he wants, for instance, where a friend of his might be that moment.

As mentioned above youbeQ users will have the possibility to create a profile. However, an important part of their profile will depend of their interaction with the world and other users. We developed a concept called stamps on the passport, which is a testimony that another user liked you and your kind of interaction. Other relevant detail is that the Platform keeps a record about your last location, the travel log, you restart in the same place where you abandoned it.

There will be several games and virtual worlds to explore, everybody has access to try it, but for regular use you have to have high levels of popularity (a lot stamps). The purpose is to boost interaction and leverage the use of the youbeQ.

[UPDATE, October 24, 2011 — New registration code below]
While the game itself is still in beta, it has a ton of potential. The beta is currently closed, but we have an invitation code to allow 200 of you to sign-up today! Head to youbeq.com and use the code youbeq4GLJR7610J to sign up instantly.