Sometimes the timing of the Google Street View car is pretty cool. Take the following story from user “Highground3” in the Google Earth Community:

This is where a 2011 Lipitor commercial was filmed (the one where a cyclist starts off by watching cyclists zoom past him down a steep hill, and he remembers how when he was young that he didn’t where a helmet)…what makes it most amazing is that the Google Street View crew were driving by on the very day of that shoot! Please view the Street Scene yourself…AMAZING…What are the odds? The two subsequent scenes were filmed just up the street and the final scene was filmed at the Knotts Berry Farm Boomerang rollercoaster.

When viewing the commercial on television for the first time, the thought was simply, “Nice location…Wonder where that commercial was filmed?”…clearly it was somewhere in sunny southern California. Next thought?…See if it is possible to find it by using Google Earth.

The location was found by quickly perusing Google Earth along the southern California coast until a likely match was made(primarily by correlating the pacific coastline shape and the circular water tanks in the background behind the cyclist as he talks to the camera). To make certain that it was indeed the correct location, the next step was to drop down to ground level with Street View to make verify the same view as in the commercial. To this browser’s complete surprise, not only was this the correct location, but Street View cameras actually caught the commercial in the very act of being filmed!

That’s a great find, Highground3!
Update: The full commercial can be viewed here.
Below is a screenshot of the Street View, and you can view it for yourself in Google Earth by using this KMZ file

to find the location, then diving into Street View mode. 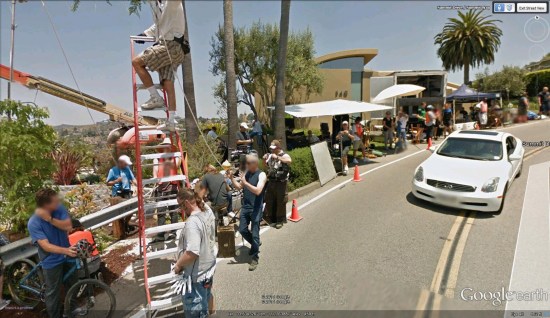