A few weeks ago, we showed you how France had tried to hide the location of a nuclear plant, after that plant made news after a minor explosion. We showed you how it was hidden in Google Earth by their imagery provider, but was clearly visible by using historical imagery.
A similar situation has just come up in Sweden. Stefan at Ogle Earth has written a great summary of the story, but it goes something like this:
• Some of their “military secrets” are visible on Google Earth, but not on their local mapping sites (Hitta.se and Eniro.se).
• Google uses imagery from Lantmäteriet to cover parts of the country, and Lantmäteriet sensors some sensitive areas.
• There are two main underground control centers for Sweden’s air force; one is visible in Google Earth, the other isn’t.
• The one that is visible is because Google is using imagery from DigitalGlobe for that part of the country, and they’re not censoring it.
Stefan goes on to point out something even more interesting — historical imagery of the obscured area from a few years ago clearly reveals the facility, and the imagery was also from Lantmäteriet; they just weren’t obscuring it yet!
The bigger problem is the method of how the imagery is being obscured. In many cases, such as the Netherlands and the French nuclear plant we mentioned above, imagery is simply blurred to hide details of the buildings, like this (KML 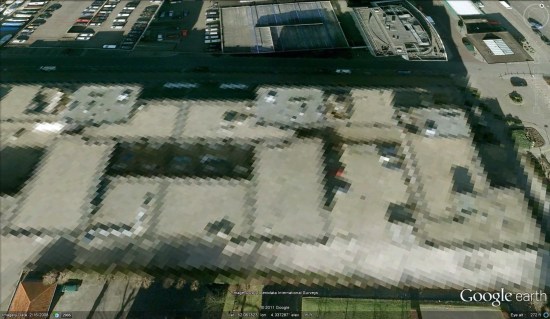 In the case of Sweden, they modify the imagery to look like fields and forests. While this could potentially help hide their secrets more effectively, it also puts into question the accuracy of all of their imagery.
Stefan shows the example of the village of Hästveda, seen below before and after the photoshopping that removed it from their imagery. 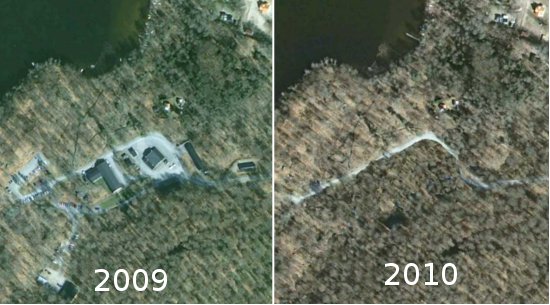 As I asked last time, is it becoming futile to try to hide imagery like this? Or should they keep pressing on in order to try to prevent people from discovering the location of sensitive areas?