Google Earth on mobile devices just took a big step forward with the release of Google Earth 2.0 for Android, with a special emphasis on tablets. It has some great new features, but is still lacking some of the features that we were hoping for.
When I purchased my Xoom a few months ago, I showed how well Google Earth ran on there, despite only having the scaled-up phone version to use. Now that the software has been customized specifically for tablets, it’s quite amazing.
The big addition to this release is 3D buildings! Every 3D building that you can view on your desktop is now available on your Android tablet. The buildings use the same high quality texture as the desktop version, though there’s no anti-aliasing built-in so things can look a bit choppy around the edges. Here’s a quick video showing how it works:


Curiously, it doesn’t appear to load any of the gray buildings from Google Earth — only the ones that are textured. Nor do any of the new 3D trees load, though that’s not a big surprise at this point.
In addition, they’ve worked on the “action bar” at the top of the screen to make it easy to search for locations, toggle layers, reorient yourself, etc. It’s very well done.
Other nice new features include the new content pop-ups when viewing items like photos, as shown here: 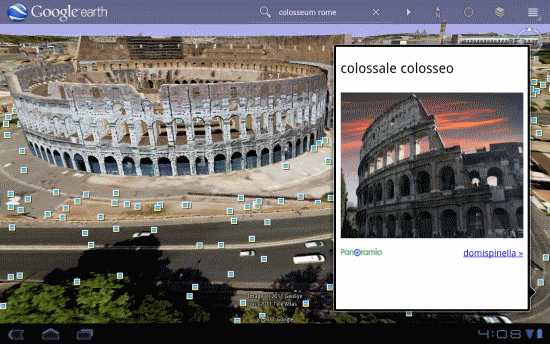 The photo feature is nice, but it’s difficult to view the picture full-size. Rather than clicking the photo itself, you need to click the small Panoramio link below it. Not very intuitive, though the overall photo viewing experience is quite nice.
In terms of performance, it certainly doesn’t run quite as smoothly when you’ve got the buildings enabled, but it holds up quite well. Much of that will be based on the capabilities of your tablet, but the Xoom with its dual-core processor handles things quite well. It’s very apparent that they worked hard to optimize performance on this version.
The only real downside is that they’ve ignored most of Frank’s list of things the tablet version should have, specifically KML support. Having some degree of KML support on the tablet version would be quite nice, and I’m sure we’ll see it someday. We believe that the new Android tablets are fully capable of supporting all of the features from the desktop version, and it’s a matter of Google taking the time to port those features over.
If you have a Xoom, or one of the other few Android 3.0-enabled tablets, give it a shot and let us know what you think!
(via Google Mobile Blog)