If you watched the second episode of the Geospatial Revolution that we posted a few months ago, you may remember how the city of Portland was making excellent use of mapping technologies such as Google Earth to help with city planning.
I’m reminded of that story when looking at what the city of Douglasville, Georgia is doing as they prepare to undertake a massive highway widening and reconstruction project. The Highway 92 Project uses similar tools as other projects, with a variety of charts, PDFs and Word documents. However, they also are using Google Earth so people can get a very close look at how the proposed changes would impact their lives. 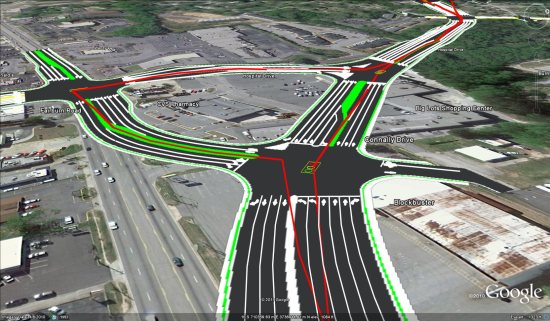 As you can see from the image above and the video below, this project will make some massive changes to the layout of the road:

During recent meetings, the video was shown for the audience to view, and the presenters had the KMZ file

loaded so they could walk through any questions that viewers might have.
Croy Engineering created the file for the City of Douglasville for use in the public information portion of the project concept phase. Greg Teague, Director of Engineering Services and Wayne McGary were the driving force behind the creation of the kmz file and movie.
For a project like this, Google Earth seems to be the perfect way to show it off. Novice users can watch the fly-through video, while more advanced users can use the KMZ to dig in deep.
The only thing that would make this better is the addition of 3D buildings and trees to help get a better feel for the affected area, but that will come over time as Google continues to expand those into more areas of the world.