We get a lot of messages from users asking when a particular area will be getting an imagery update, which we’re unable to answer. While we never know of those updates ahead of time, Google has just released a new tool called Follow Your World that will notify you each time there are imagery updates in the area(s) you specify. 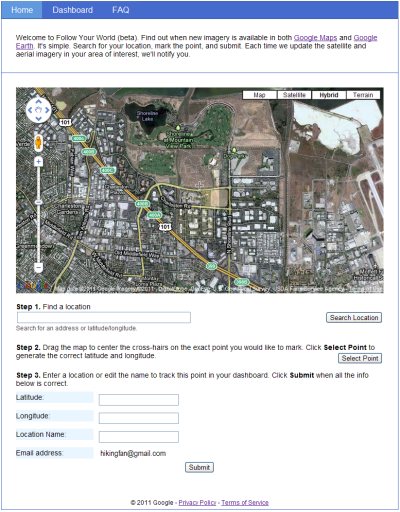 It’s a remarkably simple tool — just find your location on the map, give it a name, and they’ll send you an email when they have new imagery for that area. We’re not yet sure how quickly they send the emails when new imagery is released, but we assume it will be after they imagery has migrated to Google Maps since people can use this tool for both Google Earth and Google Maps. As you may know from our recent imagery updates, new imagery arrives in Google Earth first, then shows up in Google Maps a few days later.

It’s unknown whether Google will use this information to help decide where to publish future imagery updates, but it seems unlikely. There are a lot of steps involved in posting new imagery. In addition, Google could likely look at the overall usage pattens in Earth and Maps by simply calculating which image tiles were loaded most often.

Lastly, a few readers emailed us about this last week, but Google had asked us to hold on the story until today while they polished up a few things. We certainly appreciate those tips, so never hesitate to contact us if you find a new site like this, fresh imagery, or anything Google Earth-related that might be of interest to others.

For more, check out the story on the Google Lat Long Blog, or simply head over to the Follow Your World site to try it for yourself.