Over the years, we’ve seen a variety of interesting items revealed as result of Google Earth.
One of the most popular was the Swastika-shaped Navy Barracks that Frank first told you about in 2007. For years it was a simple building, but it gained fame once viewed from above, as it was clearly (though certainly unintentionally) shaped like a Nazi swastika.
Another great example was the huge scale model of China that was discovered. It represented an area that was occupied by China but claimed by India and was in dispute, and the model itself was nearly a square kilometer in size.
The latest example is the Star of David being discovered on the roof of the Iran Air headquarters. The building was constructed in 1979, and it seems that no one noticed the symbol until now. Unlike the Navy swastika building, this symbol was clearly intentional, though it’s unclear who placed it there. 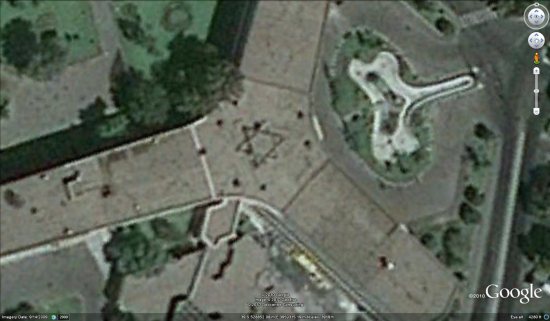 Iranian government officials are quite upset by this, and plan to have it removed quickly. However, it may stay in Google Earth for a few years, or at least until the imagery in that area is updated again. If you’d like to see it for yourself, you can fly there using this KML file

.
If you enjoy seeing strange items like this, there are a few categories full of fun items like this over at Google Earth Hacks: Crop Circles, Huge Man-Made Structures and Huge Symbols. You can also check out the great “20 Awesome Images Found in Google Maps” post by Search Engine Land,
For some Street View fun, try the Giant Items/Oddities category at GEH, or the Strange Things category at StreetViewFun.
Of all of the strange things you’ve seen in Google Earth, which is your favorite?