We’ve seen a variety of 3D College Campuses over the last few years, such as the awesome 3D buildings at Bowling Green and the collection of tools at the University of Exeter.
We’ve also shown you Northeastern University in the past, when they added 88 3D buildings to their campus. Now they’ve done a few more things that are quick exceptional.
The main piece they’ve added is expansion of their campus map to highlight its “global learning experiences” in 160 cities across 60 countries, and also to show incoming students the cities across the globe where international students are from.
They’ve also added a lot more detail to the campus, including 3D trees (unrelated to the new 3D trees in Google Earth 6), and even some tables and chairs. It looks amazing! 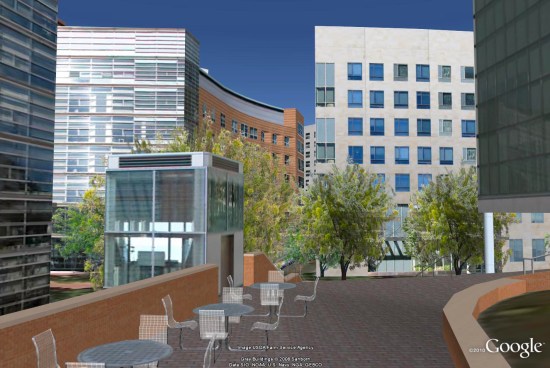 For more, go check out the new and improved campus map, fly to the campus in Google Earth using this KML file

or read the details in their press release below:

CampusBird™, developed by Boulder, Colo.-based concept3D, presents a virtual mapping environment and content management system, based in large part on Google Earth and Google Maps, for prospective students and other visitors to explore.

Northeastern University is making the most of concept3D’s technology in several innovative ways. The Northeastern 3D campus guide and global links are at: northeastern.edu/neuhome/aboutnortheastern/maps.html.

In addition to Northeastern’s 3D virtual tour of its urban Boston campus, students also can “fly” across the Google Earth world and click to read about global learning experiences NU offers in 160 cities in 69 countries. Incoming students also can click to see the cities where international students are from in 125 countries.

By clicking on Costa Rica, for example, both students and their parents can learn how NU is partnering with the Children’s Hospital there, or zoom into England where Northeastern students works with leading companies like Barclays Wealth and One change: Turner Entertainment Network should be Turner Broadcasting Systems, Cartoon Network Europe.

“Presenting the university’s global presence and its cultural diversity along with the 3D tour throughout its Boston campus allows for a completely immersive online experience,” said Oliver Davis, concept3D CEO and co-founder.

“As Northeastern continues to expand its global presence, we seek more innovative ways to inform prospective and incoming first year students of Northeastern’s extensive worldwide network and educational reach beyond Boston,” said Philomena Mantella, Senior Vice President, Enrollment & Student Life at Northeastern University. “A key advantage of this map is its capability to showcase the locations across the globe where our students are making an impact, whether it’s through our global co-op program or various academic programs.”

University officials also are planning to launch a series of guided themed audio tours before the new year.

To create a CampusBird 3D map, concept3D’s team of globally recognized 3D modelers and web developers build photorealistic 3D models of campus buildings and grounds and place them in Google Earth. Layers of information are added to the CampusBird platform to provide location-based details such as individual building info, parking and Wi-Fi hotspots.

The process, which takes anywhere from four to 12 weeks, produces a detailed virtual environment that current and future students, campus visitors, university staff, alumni and community members will find both useful and fun.

Using Northeastern’s 3D map, for example, a student can move around a building or jump clear across campus, seeing different views of the university and Boston skyline. Click on each building for a color photo, short description and further location details. Admissions prospects have a 3D view of the place they’re thinking about their next four to five years.

Each CampusBird interactive map is easily added and updated by school staff through the CampusBird online content management system hosted by concept3D. The CampusBird CMS allows schools to simply and dynamically update, edit and add content to their map. If an image, video or description is changed in the CMS, the map is automatically updated on the school site and campusbird.com.

“Our clients find so many ways to use the 3D content and maps that they often achieve ROI/payback in as little as three months,” Davis said.

Along with the institution’s own website, college.campusbird.com and the CampusBird iPhone app, the models and maps appear on Google Earth, Google Maps and other websites that use Google Earth browser tools.