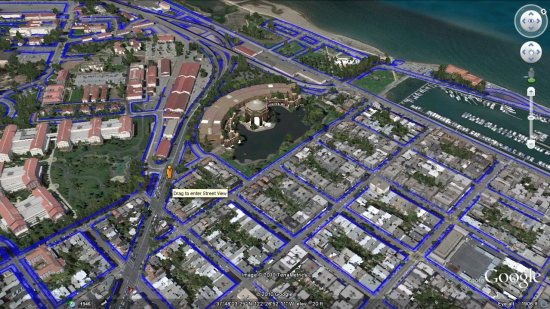 Street View has been a part of Google Earth since 2008, but it’s always felt a little bit bolted-on. You had to find it under the layers, and it was a bit clunky to navigate around. Now, the experience is fully integrated and it’s remarkably smooth.
Similar to Google Maps, simply grab the Pegman from alongside of your navigation controls and roads will highlight blue where Street View imagery is available. Drop him on a road you’ll fly right down to that Street View level!
In addition, the controls have tightened up, you can toggle between Street View and standard mode very easily, and you can finally direct people into Street View using KML. It’s a very slick experience, and it’s been integrated very well. Here’s a short video that shows the new Street View feature in action:

A few years ago, Microsoft added 3D trees to what was then known as Virtual Earth. It was impressive, but they only included a few cities. Google has spent that time building a system that could do two things successfully:
• Allow them to add a huge volume of 3D trees.
• Integrate them in such a way as to not affect the performance of Google Earth.
As you browse around, I think you’ll agree that they succeeded. The initial release includes over 80,000,000 trees in a variety of cities including San Francisco, Chicago, New York, Athens, Tokyo and Berlin. In addition, they’ve build out some full forests in parts of Africa and Mexico.
The models are all species accurate, and look amazingly sharp. You can control the tree layer using a separate sub-layer inside of “3D Buildings”.
They’ve been working with various partners to help model threatened forests around the world and have made the forest models as accurate as possible with help from organizations such as the Green Belt Movement, the Amazon Conversation Team and CONABIO.
For more on the new 3D trees, check out this short video:

Here is a video that shows more about this new feature:

To get started, you can download Google Earth 6 at earth.google.com.
What’s your favorite new feature?